Redlands running back Arturo Diaz shakes off San Gorgonio defenders on his 3-yard TD run in the first half last week. 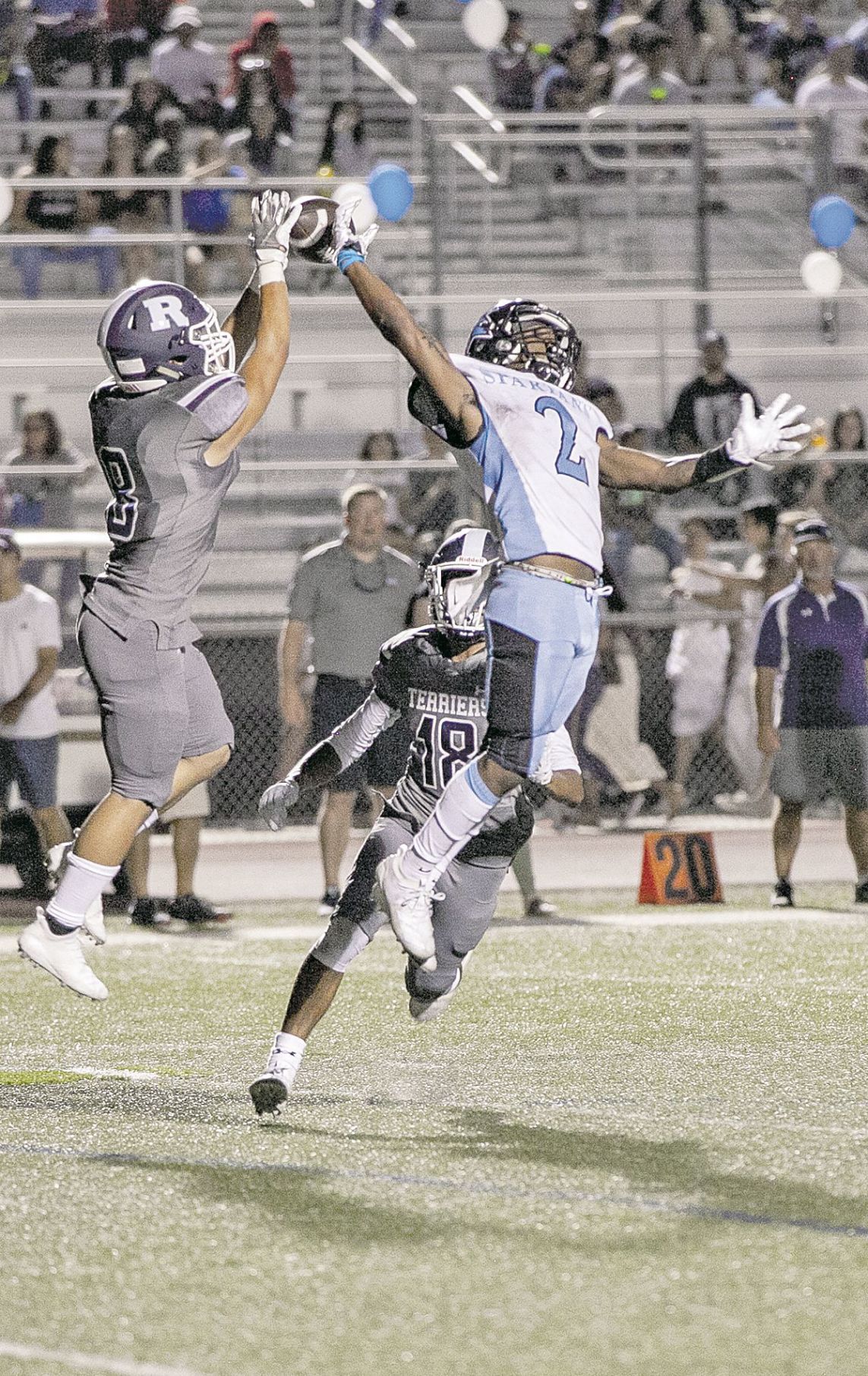 Redlands High free safety Josh Ramirez breaks up a pass to Jaylen Matthews, 2, who racked up 133 combined rushing and receiving yards for San Gorgonio in the Terriers’ 21-18 win over the Spartans.

Redlands running back Arturo Diaz shakes off San Gorgonio defenders on his 3-yard TD run in the first half last week.

Redlands High free safety Josh Ramirez breaks up a pass to Jaylen Matthews, 2, who racked up 133 combined rushing and receiving yards for San Gorgonio in the Terriers’ 21-18 win over the Spartans.

It might’ve seemed easy to boil last week’s Redlands High win over San Gorgonio, 21-18, down to a couple of basic factors.

There was a special teams standoff, plus a matchup of an experienced QB against a first-year Varsity starter.

“Miguel Olmedo, our defensive coordinator, called a good game,” said second-year Terrier head coach Mike McFarland. “There was a lot of defense out there. We had a plan.”

Olmedo said he threw “several” different looks at Burbine. Was it a factor in the outcome? “I believe so.”

The CIF Division 7 Terriers, 2-8 last season, were taking on a CIF Division 9 defending champion that won 12 out of 16.

“We played them tough last year,” said McFarland, reflecting on a 26-21 loss at San G. “That game went right to the wire.”

So did this one.

Since San G was missing a placekicker, the Terriers successfully stood off a trio of Spartans’ two-point PAT attempts. Redlands countered with a near-costly 20-yard average on four punts.

“We’ll get our kicker back this week,” said 2018 CIF Coach of the Year Rich McClure, San G’s third-year coach. “Ineligible.”

Both coaches, McFarland and McClure, grumbled there was lots of work to do with each QB.

Since most people watch QB play — keeping their eye on the ball — few probably take in rabid defensive play. There was plenty from both sides.

San G held Redlands to 66 yards on the ground.

Said McFarland: “We did a good job of locating him on every snap.”

Arturo Diaz nearly had a 96-yard interception return for a TD, except that a Terrier assistant

coach stepped into the “river” along the sideline. A penalty flag fell at the 30, opposite side of the field where Diaz was making his return.

It nearly cost Redlands this game. It would have put the game seriously out of reach, likely a 28-6 lead with one quarter remaining.

The Terriers’ 3-0 advantage in PAT kicks proved to be the difference.

Each of San G’s TDs were followed by two-point PAT attempts, failing to score on a pass, a run and a run-pass option after the Spartans’ three scores. LB Jaheim Crawford’s 66-yard interception return with 1.5 seconds left in the first half initially got San G on the scoreboard.

So did cornerback Adam Valencia’s chin-rattling tackle of Crawford on a pass reception.

One snap before Luna’s interception, he stepped into another Burbine pass attempt, actually getting his hand on the football.

Luna told reporter John Murphy, “I saw the QB wanting to throw that little drag route. I didn’t get it on the play before, but I did on the last one.”

Have you gotten a flu shot?