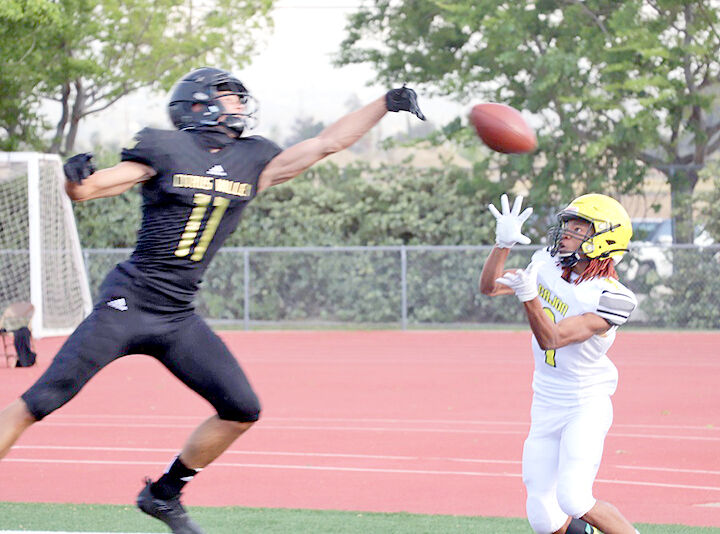 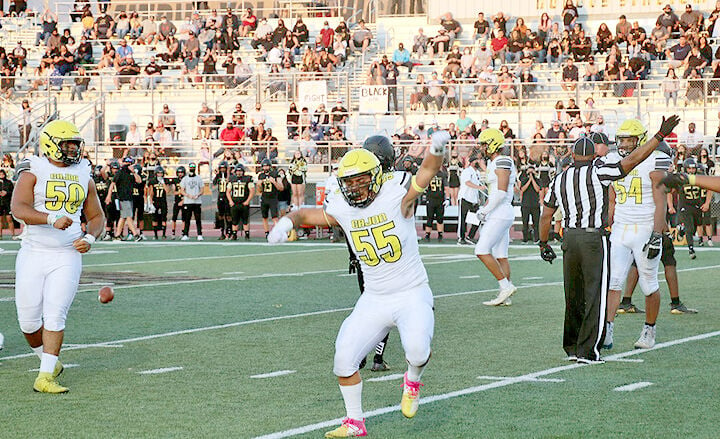 REDLANDS — Meet the new boss, same as the old boss — as that old rock group The Who once sang.

The Cowboy victory gave Cajon (5-0) the championship of the abbreviated spring season. It also likely gave Citrus Valley coach Kurt Bruich a headache. His team in 2019 came within a non-call on a potential pass interference penalty of toppling Cajon. This year a fumble with 2:58 left gave Cajon the ball with a short field and led to Amir Brown’s 3-yard scoring run with 32.8 seconds left and a Cowboy victory.

“We did some really good things,” Bruich said. “I thought it happened to us last year and it happened to us this year where we kind of get held on a questionable call that we didn’t get on Brock Lium. That’s two years in a row that happened to us against Cajon. But we got better as the year went on.”

It seemed the odd, coronavirus-marred season would end with Citrus Valley claiming a CBL co-title with Cajon, which has now won 23 consecutive league games and four straight league titles. But with just under three minutes left in the game and Citrus Valley clinging to a 19-14 lead, Cajon linebacker Preston Snyder-Montgomery hit Blackhawk running back Jeremiah Claiborne and forced a fumble.

Snyder-Montgomery then pounced on it as his teammates celebrated wildly on the Blackhawk 30-yard line.

It took seven plays, but eventually Brown powered over from the 3 to give Cajon the victory.

“It felt great,” Brown said. “We struggled the first half, and they were playing really good defense. When they kept calling back our touchdowns it got me in kind of a down mood, but we got the fumble recovery, and I knew the offense had to make something happen.”

It was a bitter development for Citrus Valley (3-2), which played so brilliantly for most of the game. Following the game, Bruich had the seniors march off the field together to the applause of the home side — the Blackhawks no doubt proud of their season but mindful of what might have been.

“It’s very disappointing,” said Citrus Valley senior quarterback Dylan Wheatley who passed for 152 yards and two scores. “We’re always so close and yet so far. I’m just going to remember everyone sticking together through the (coronavirus) and everything. Everybody got better, even though we played just five games.”

Cajon scored first on a 5-yard run by Freddy Fletcher (168 yards on 35 carries) with 9:18 left in the first quarter. But Citrus Valley responded with a 40-yard touchdown pass from Wheatley to sophomore Lium, who sparkled at receiver, defensive back and on special teams.

Citrus Valley continued to move the ball with its short passing game and with Claiborne (115 yards on 20 carries) running behind the offensive line of James Burke, Tyson Mitaina, Cole Teeter, Jezniah Thurston and Jalen Moi. The Blackhawks nudged ahead, 13-6, on Claiborne’s 5-yard TD run in the second quarter.

An upset victory seemed in the offing when Citrus Valley opened the third quarter to drive 80 yards to score on Sergio Cervantes’ 6-yard scoring reception from Wheatley. The Blackhawks led 19-6 with half the third quarter gone and were in control.

“They were doing some things to keep themselves on the field, completing some short passes,” Cajon coach Nick Rogers said. “No. 2 (Cervantes) had a great game for them. But our defensive coaches decided to put an extra guy out there to take away their short game and luckily they had a few bad snaps here and there and then obviously the fumble.”

Cajon had some long plays called back due to penalties but was relentless. It scored with a minute left in the third quarter and then made the key plays at the end to win it.

Cervantes had seven catches for 73 yards and one TD for Citrus Valley.

It was a gratifying victory for Rogers, a Mentone resident.

“This was the first time we faced a little adversity, and our kids battled all the way until the end,” he said. “(Citrus Valley) is going to be tough. Them and Beaumont. They have a lot of young kids and we’re going to have to get ourselves reloaded and figure out where we’re going with this. We play them first next season right out of the chute, so we’ll see what we’ve got.”