Traffic zips along the Highland curve on State Route 210. 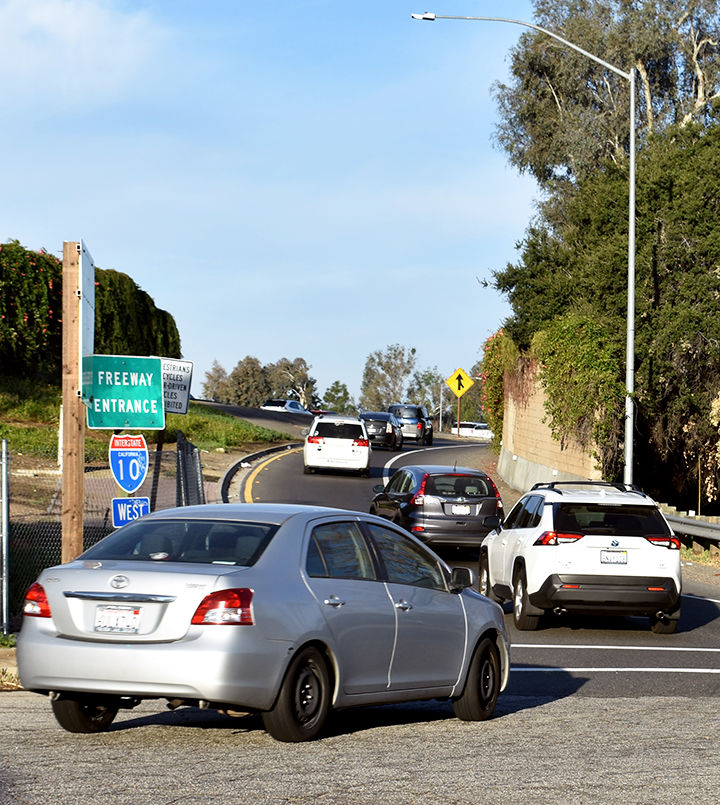 Cars stream onto the westbound onramp from University Street to Interstate 10 Tuesday morning. The $5.5 million project is scheduled to begin this spring. 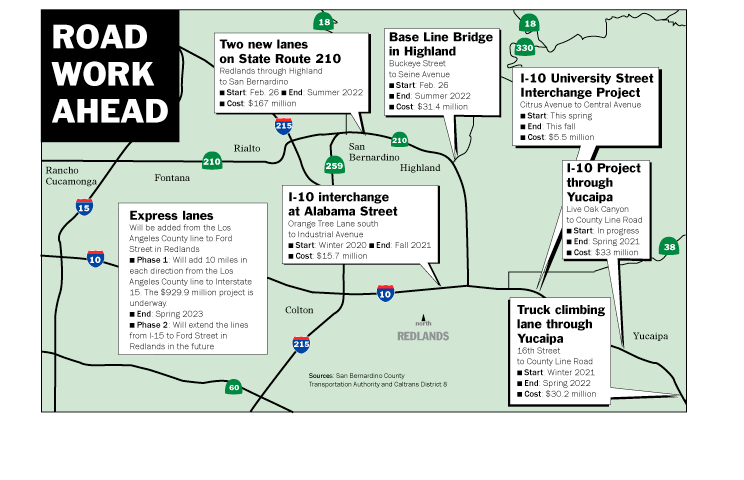 The San Bernardino County Transportation Authority will break ground on Wednesday, Feb. 26, on a long-awaited project to add two lanes to State Route 210 and expand the Base Line Bridge.

“The planned improvements to the 210 go a long way toward addressing congestion and safety concerns along this heavily traveled corridor, while creating economic, environmental and quality of life improvements for our entire region,” said Darcy McNaboe, president of the San Bernardino County Transportation Authority board and mayor of Grand Terrace.

Project Delivery Manager Dennis Saylor  said the project is actually three projects in one totaling $167 million. Approximately $99.9 million of the total cost will be funded by Measure I and $42.1 million will be funded by State Highway Operation and Protection Program funds.

The interchange improvements will be a $31.7 million project with 42 percent, $18.4 million, funded by the city of Highland and the rest by Measure I funds. (Measure I, the half-cent sales tax approved by voters in 1989 and extended in 2004 to 2040.)

“Pavement improvements on existing lanes of the 210 also will be made,” according to the authority’s website.

The 6.1 miles of SR-210 from San Bernardino Avenue to Redlands to Sterling Avenue in San Bernardino are the only portion of the freeway without six lanes from where it starts in Redlands to where it ends in Santa Clarita. Concentrations of housing and retail along the corridor have created significant bottlenecks at critical times during the day, according to the Transportation Authority.

• Auxiliary lanes in each direction between Base Line and Fifth Street/Greenspot Road so drivers won’t need to enter the main flow of traffic to travel to and from Highland’s two major east-west thoroughfares.

• Decorative signage informing freeway drivers they are in Highland.

The project will not require the acquisition of new permanent right of way. In general, the majority of the project improvements will occur within existing Caltrans right of way. It will have no effect on agricultural resources, land use and planning, mineral resources, population and housing and recreation, said negative environmental impact report.

According to the Air Quality Report, the project will not result in adverse air quality impacts.

The project is expected to take at least 3.5 years to complete. However, the Transportation Authority is working with contractors to shorten the duration of construction. During construction, drivers should expect and be prepared for new K-rails on the freeway, construction signs, detours, lane closures and workers on the freeway.

A project to widen Alabama Street from Orange Tree Lane to Industrial Park Avenue is on the design table and ready to start construction, according to the authority.

Construction is expected to start this fall and it is expected to take at least a year to complete, said the Transportation Authority. Funding for the project comes entirely from Measure I.

Measure I is also funding the I-10/University Street Interchange, scheduled to begin construction this spring, said the Transportation Authority.

The $5.5 million project will improve University Street at the I-10 interchange between Citrus Avenue and Central Avenue, and also implement minor ramp widening, add turning lanes, traffic signals and operational improvements within the existing right-of-way, said the Transportation Authority.

The project will reduce congestion and improve traffic operations. The project is scheduled to be completed by the spring of 2021.

The interchange serves the east end of Redlands, and provides access to the University of Redlands, Redlands High School and a large residential community.

The capital projects are funded by Measure I.

The first of three phases of the $929.9 million project I-10 Corridor Project, also known as toll lanes project, is expected to begin in the coming spring, according to the Transportation Authority website.

The project will have two toll express lanes in each direction. Lanes to assist drivers getting on and off the freeway will be constructed in selected locations.

Estimated completion of the project, funded in part by Measure I, is spring of 2023.

The project immediately alleviates the bottleneck, said the Transportation Authority.

Toll pricing will vary based on demand and distance. Exact pricing will be determined when the Express Lanes open and will be advertised at each point of entry within the corridor. Vehicles with a Clean Air Vehicle decal can use Express Lanes with exceptions.

A $30.2 million I-10 Truck Climbing Lane is on the drawing table and is expected to begin construction in winter of 2021. According to the Transportation Authority, the project will add a truck climbing lane from west of the 16th Street Bridge in Yucaipa to just east of the County Line Road Bridge at the San Bernardino County and Riverside County line.

The project will separate slow-moving trucks that are climbing the steep grade along the project from the general traffic lanes, said the Transportation Authority.  Funding for this project will come from the state and Measure I. It is expected to be completed by spring of 2022.

Hector Hernandez Jr., editor of the Highland Community News, contributed to this story.

The Transportation Authority will break ground at 10 a.m. Wednesday, Feb. 26, at the empty lot next to the ARCO station on Base Line on the east side of the Base Line Bridge. The contract has been awarded to Guy F. Atkinson Construction, based in Foothill Ranch in Orange County.

It will hold an open house to discuss the project from 6 to 8 p.m. Wednesday, March 4.

The meeting will be held in the council chambers at Highland City Hall, 27215 Base Line.

There will be no formal presentation, but the staff will be on hand to answer questions. The meeting will be available on the Transportation Authority’s Facebook Live page.

Timeline for the State Route 210 project

City Council denied on Tuesday, Feb. 18, a request to waive a fee made by the San Bernardino…