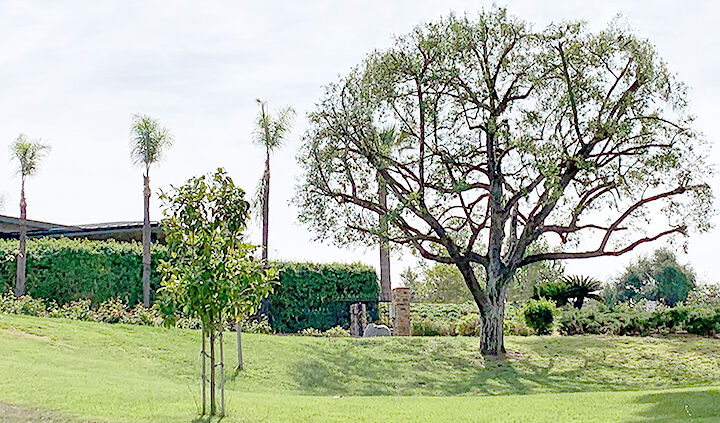 Examples of an over-pruned oak and palms, which weaken and invite disease. Note how a palm frond is already knocked down by wind. 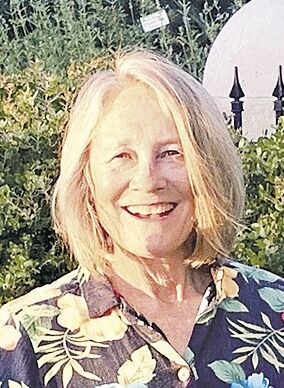 Historian Larry Burgess, director emeritus of A. K. Smiley Library, has long lamented the state of Redlands’ trees. In a talk 10 years ago, he called our Redlands historic trees under assault. I checked back with Burgess, and little has changed.

Historically, the Redlands founders, Ed Judson and Frank Brown, along with the Smiley brothers, warned about severe tree pruning.

“They were concerned about the number of trees dying as a result of owners well-intentioned care,” Burgess said. “And that was 100 years ago.”

Years ago, Burgess said the city employed parks staff whose specific task was caring for our trees.

“Today no such employees are on contract and the fate of trees is largely left up to the unknowing [residents using ignorant] ‘cut and slash’ firms,” he said.

Exacerbating this, the city now outsources its licensing of tree companies. Most have no training or education about trees, or if they do, it’s one certified arborist spread between crews.

To help people understand the impact of over-pruning, I tapped ISA certified arborist Paul Chaney with First Arbor Care, to comment on a recent tree pruning job done by another tree service.

I was alarmed to see how the amount of foliage coming off the oak. What is your take?

“This type of pruning is very damaging. The coast live oak in the photo shows about 85-90% of live tissue being removed. The accepted maximum percentage of live tissue that should ordinarily be removed from any tree is 20% in any one growing season. For large, mature trees, like this one, the maximum amount is about 5%. It is not a professional practice nor according to the tree care industry professional standards. This type of work is done in ignorance of trees’ physiology and anatomy.”

Why is this so damaging?

“The removal of the photosynthetic leaf surface is equivalent to cutting the tree’s energy income. The tree is an energy-economic system, with the sunlight energy being captured, by photosynthesis, in the carbon bonds of sugar. Sugar is the energy-money of organic life. Could you tolerate an 85% cut in your income? When the tree loses so many leaves, it has to rely on its energy savings account, which is starch stored in the remaining twigs, branches, and other stem and root tissue, to grow new leaves and branches, and to keep its cells alive.

“It also exposes bark to direct, hot sunlight. It reduces transpiration flow through the xylem, so the cooling effect of this flow on the bark is diminished or eliminated. The bark tissue overheats and dies, causing decaying cavities to develop on the upper sides of the branches.”

“With this high percentage of energy-capturing foliage removed, the tree likely will not be able to mobilize enough energy, so parts of the woody structure will die. When both above-ground and below-ground tissues die, the de-composers and pathogens move in so over-pruning can cause root loss, root decay and more disease due to insect, bacterial and fungal invasion of both dead and living tissue.

“You could say that the tree’s health insurance policy has been canceled and that all the doors of its house have been opened to thieves and murderers.”

What are other types of over-pruning?

“Topping is the indiscriminate cutting of main branches and leaves large wounds open to decay at the top and also prompts the growth of weak branches that need continual attention.

Lion’s tailing, where a large number of inner branches are removed, leaving long limbs with puffs of foliage at the end, predisposes the tree to branch failure 10 to 25 years in the future. Too many tree owners have been conditioned to believe that they need to see the interior trunks and branches--and that it looks ‘so pretty’ that way.”

“The queen palms in the photo show about 20% of normal leaves. Over-pruning palms results is disease transmission and susceptibility to fungal pathogens and borers, as well as a narrowing of the trunk due to reduced energy. Palm tree pruning standards include the removal of dead leaves, flowers, fruit and dead loose-leaf bases. No green leaves should be removed.”

How to find a good tree pruner?

“Hire a company with an ISA certified arborist, which requires many years of training and passing an exam. And make sure they’re onsite. Even a licensed tree contractor isn’t required to know anything about trees. The typical tree pruner who knocks on your door is not aware of the standards and doesn’t think they’re doing poor jobs.”

Chaney and other certified arborists support asking for photos of jobs and proof of a business license with the city. Beware the lowest bid. Ironically, a properly pruned tree doesn’t require pruning for many years, while these over-pruned situations require more work — and cost — in the long run. And consider deferring pruning until fall.

Birds are actively nesting and are protected by two California regulations, which is why Audubon suggests pruning September through January.

Linda Richards is a science writer. See more info from Paul Chaney and examples at  ifnaturecouldtalk.com