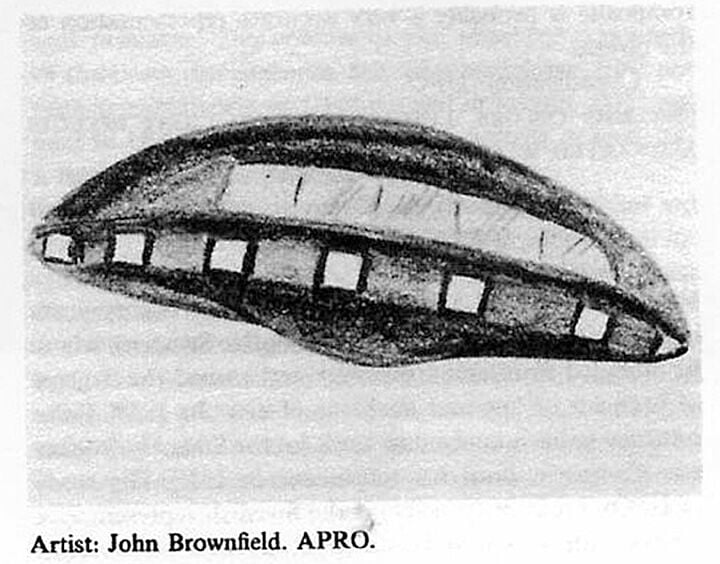 Sketch of the UFO by John Brownfield based on the descriptions of residents who said they saw it in 1968 in north Redlands. 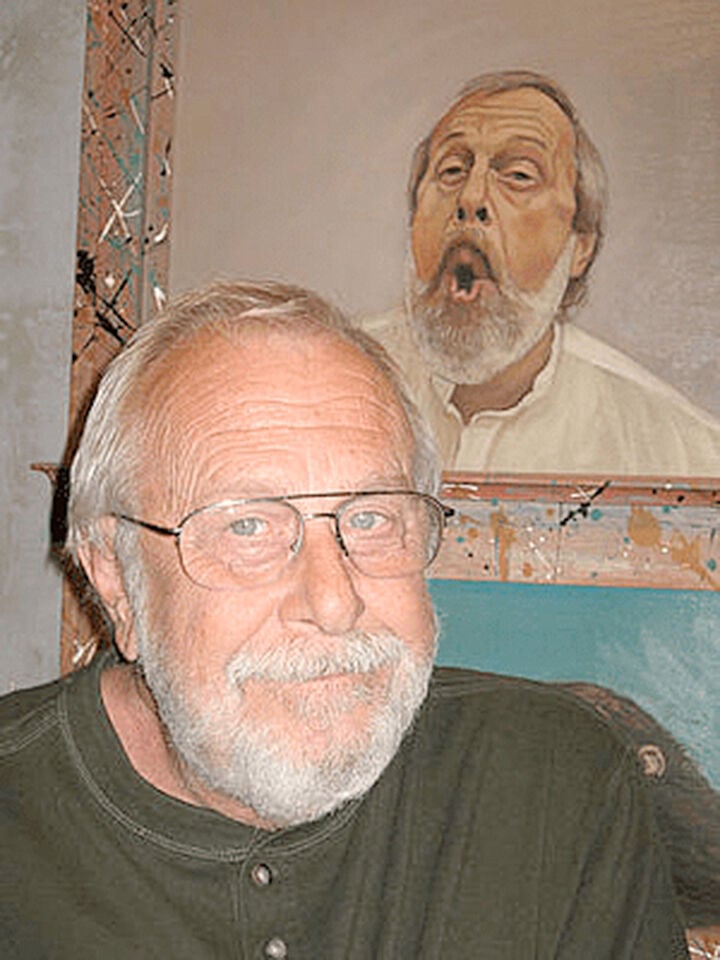 Sketch of the UFO by John Brownfield based on the descriptions of residents who said they saw it in 1968 in north Redlands.

Update includes a list of survivors and other information.

John Petri Brownfield, an art professor at the University of Redlands for 38 years and a well-respected artist, died on April 28, 2020, of natural causes at his Redlands home. He was 79.

No services were held, but a spokesman for Emmerson-Bartlett Memorial Chapel confirmed that he has been cremated. His wife, Gail, preceded him in death. They were married in 1983. Emmerson-Bartlett also made the arrangements for her in late 2018. She made jewelry.

He was born on June 6, 1940, in Chicago, and graduated from William Howard Taft High School in 1958. He earned a bachelor’s degree in fine arts from Illinois Wesleyan University in Bloomington, Illinois, in 1962, and a master of fine arts from the School of Fine Arts of Chicago in 1964, according to his Facebook page.

Brownfield taught at the U of R from 1965 to 2004, according to the University of Redlands website.

Obituary information provided after the story was published in the Redlands Community News said he had lived in Redlands for 53 years.

He is survived by his daughters Sarah Brownfield of Redlands and Sybil Brownfield of Indianapolis; sister Margaret Brownfield Galivan of Chattanooga, Tennessee; and three grandchildren.

A post on the Redlands Art Association website about one of his drawing classes said, “Brownfield strongly identifies with figurative traditions of the Renaissance artists and confesses that he loves great drawing. His works emphasize his skillful drawing sometimes with great wit.”

The website rubylane.com advertised one of Brownfield’s paintings as “a beautifully executed pencil, sepia chalk and white highlights drawing of a young woman, her arms crossed in front of her, signed at bottom and dated there 2004.”

The post also says Brownfield often led groups to Europe to soak in the art history.

“Brownfield made countless trips to Western Europe to view museums and galleries, with a particular thirst for the techniques of the Old Masters,” the post says. “Obviously that close study accounts for the beauty of this drawing, which, though less than 20 years old, can trace its history to the 1500s.”

He was one of the judges in the Youth Art Expo in the 2019 Redlands Festival of the Arts.

In a commentary posted on the art association’s website about a display of his work, Brownfield wrote, “A lot of my pictures invite interpretation, even the comic ones. The most recent work and what I am particularly interested in right now is in working an architectural feel into my objects.  Plaster is becoming a favorite medium for me.

“I want to make pieces that evoke association with ancient walls like what I saw in Italy and Greece and express a feeling of living antiquity, wall fragments. I am using imagery, subject matter even, drawn from classical art.  I guess I am an anti-modernist. I certainly have failed to gain any fame in the chic glossy mag art world. And I stopped caring about that long ago.”

“John Brownfield was my friend for more than years and I shall miss him,” said Annette Weis, who organizes the Youth Art Expo for the Redlands Art Association.

“My first encounter with his work was at a small gallery in Redlands when I stared with amazement at his oil painting of his interpretation of ‘Judith with the head of Holofernes.’ It’s a grim subject yet painted by many famous masters such as Sandro Botticelli and Lucas Cranach the Elder. … Here was a modern-day artist with the talent of a classical master painter living in Redlands.”

Brownfield never once boasted or acknowledged his remarkable talent and did not care to benefit financially from it and therefore was lazy about showing his work, Weis said.

“He had a wicked sense of humor. He once said to me ‘I have discovered the way to get things done quickly and well is to just ask menopausal women.’”

Weis talked to him a week before he died — neither expected it — and he was excited to get back to painting after a long mourning period following  the sudden death of his wife.

James Malcolm, a U of R biology professor and a good friend, called Brownfield a gifted figurative artist.

“He did wonderful portraits,” Malcolm said. “He was continuously inventive. He tried every medium from fresco to gesso and even to body molding. … He had a huge sense of fun with many jokes is his pictures like his self-portrait in the form of hooting chimpanzee.

His humor extended beyond his art and he was a delightful, irreverent colleague.

He will be remembered by almost 40 years of Redlands students as their great teacher, Malcolm said.

Brownfield was one of four U of R professors who interviewed some of the 200 residents of north Redlands who reported seeing an unidentified flying object between 7:20 and 7:25 p.m. on Feb. 4, 1968.

“The object apparently came down just west of Columbia Street and north of Colton Avenue, then proceeded slowly in a northwestern direction for about a mile or less, at an altitude of about 300 feet,” says a post on the National Investigative Committee on Aerial Phenomenon. “Coming to a stop, it hovered briefly, jerked forward, hovered again, then shot straight up with a burst of speed.”

“I’m convinced the people I talked to actually saw something,” Brownfield told the Press-Enterprise in 2013.

In a hearing of the House Committee on Science and Astronautics hearing on UFOs in July 1968, U.S. Rep. Jerry Pettis, who represented Redlands in Congress from 1967 to 1975, said he wasn’t in town at the time of the incident.

A few samples of the artwork of John Brownfield