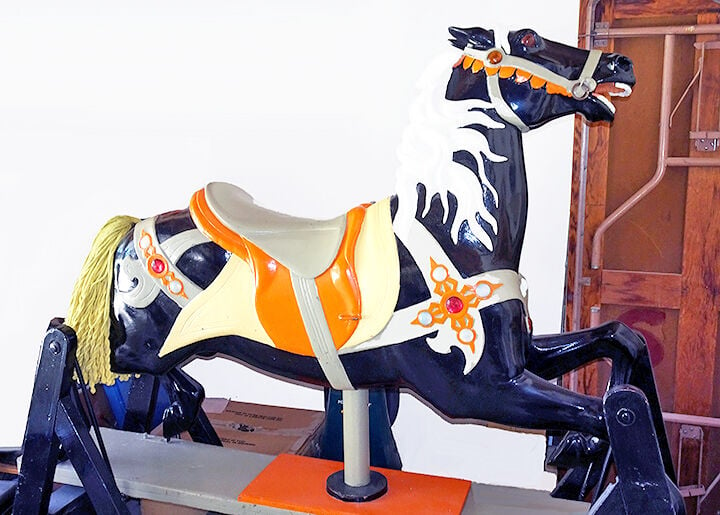 Tom Nelson, who died on July 30 of complicatons related to COVID-19 after a three-week hospital stay, donated this horse from the carousel that attracted children to the Bootery shoe store. 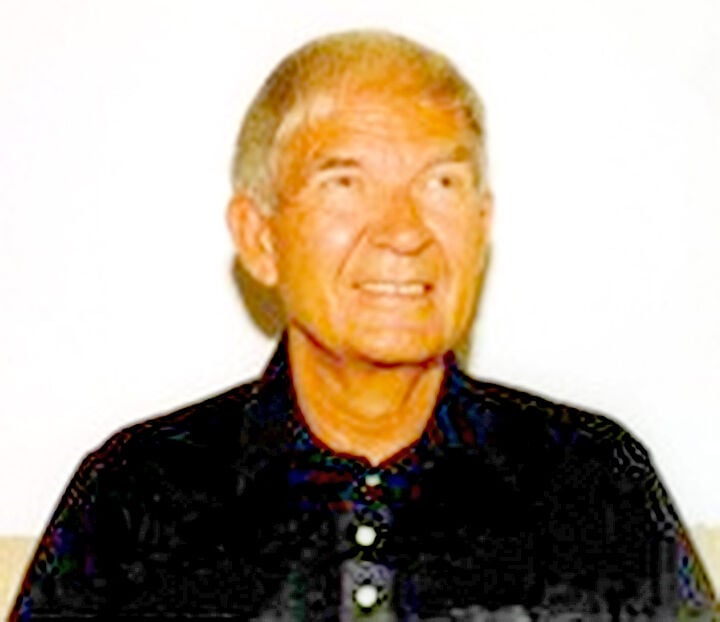 Thomas Edward Nelson, former owner of the Bootery shoe store and the Noon Kiwanis Club’s organizer of the Redlands Christmas Parade for three decades, died on July 30 from complications of COVID-19. He was 85.

The Museum of Redlands recently received from the estate of Tom Nelson the carousel horse on which children climbed for 50 years when they came to buy new shoes at the Bootery.

Nelson, who owned the Bootery with his wife Joan from 1988 to 1998, had phoned the Redlands Historical Museum Association/Museum of Redlands in mid-June that he was ready to donate the horse. The association learned of Nelson’s death on July 30 after a three-week hospital stay eventually diagnosed as COVID-19-related. Making that phone call to carry out his father’s wishes concerning the gift of the horse to the museum was his son Craig Nelson of Chino Hills.

“We had hoped to receive this iconic part of the Redlands business community for some time,” said Nelda Stuck, co-founding president with Liz Beguelin of association. “We are thrilled with the gift. So many current Redlands residents remember climbing on this beautiful wooden horse which served as a come-on for mothers to get their children into the store for new shoes.”

When Tom Nelson phoned to alert the museum about the gift, ensuing conversation on the history of the horse in Redlands resulted in Nelson agreeing to write the background on the Bootery and the horse, as well as how and when the Nelson family arrived in Redlands. Tom Nelson’s yellow lined-tablet with hand-written history has also come to the museum.

Nelson was born on Aug. 18, 1934, on the family farm in Worthington, Minnesota, to Edward and Esther Nelson. He came to Redlands in 1967 with his family. Both his children graduated from Redlands High School.

Nelson was employed at Jeanette’s upscale women’s shop in San Bernardino before joining the Bootery staff. The Bootery had been founded in 1948 with stores in Redlands and Ontario. The carousel horse was originally at the Ontario store but came east in the early days because there was more room in the Redlands store.

At that time, the Bootery was at 28 E. State St., across from Ed Hales Park.

In 1962, the store was moved to 18 E. State St. with 10 times the space. The horse attracted an expanded business in children’s shoes.

In relating his history, Nelson wrote, “The Bootery was a great place to work, a wonderful customer base and the presence of the Bootery Horse. ... Parents like the fact we fit every pair of shoes that went out the door. This was and is a very important factor for kids because shoes can help or hinder growth.”

In 1975, the store began specializing in fitting children’s orthopedic shoes, with several doctors referring patients to the store.

“We were doing several pairs per week,” Nelson said. “The best part of these fittings was the success rate. ... Moms would cringe at the look of the shoes, but they worked. When we got to the time to tell mom, ‘This is the last pair. Now we will find something cute.’ I had mothers give me a hug and cry. Who knew fitting shoes could be so rewarding?”

The Bootery made its last move in 1977 to the new Redlands Mall.

Nelson said, “The new store was designed by the U.S. Shoe Corp., and paint and wallpaper colors were coordinated to the colors of the horse.”

At that time a metal sculpture of a carousel was added to the wall décor to complement the horse. That sculpture has also been gifted to the Museum of Redlands.

“The new look and the novelty of an enclosed mall were also great for business,” Nelson said.

Tom and Joan Nelson purchased the store from retiring owner Arnold Lovick in 1988, enjoying the success of the business until retirement 1998.

Nelson said, “On Jan. 1, 1999, I rolled the Bootery Horse out of the store. It was the end of an era — 50 years in Redlands. There were many news stories at our closing, and the big question ‘Where will the horse go?’”

Nelson ended his hand-written history with, “That question took 20 years to answer,” acknowledging his phone call to give the horse to the Museum of Redlands.

Nelson married his high school sweetheart, Joan Peterson. They were together for 67 years until her death last September.

Nelson began his career in the shoe business in Minnesota at a local department store.

After “retirement” Tom was called back to the shoe business at Gottschalks where he greeted longtime customers and made new friends.

In 1990, Nelson and other local community members stepped in to save the Redlands Christmas Parade from cancellation. He continued to work on the parade as a member of Redlands Noon Kiwanis.

The parade was rained out last year and has been canceled this year because of the pandemic.

As a member of Kiwanis, Nelson scrambled eggs and flipped burgers at numerous community events. He was the shoe fitter for the Kiwanis/Kohl’s back-to-school shopping day with the Boys & Girls Club.

He is survived by his daughter Vicki of Santa Rosa and his son Craig of Chino Hills.

A memorial service will be held at 10 a.m. Thursday, Aug. 27, at Cortner Chapel in Redlands.