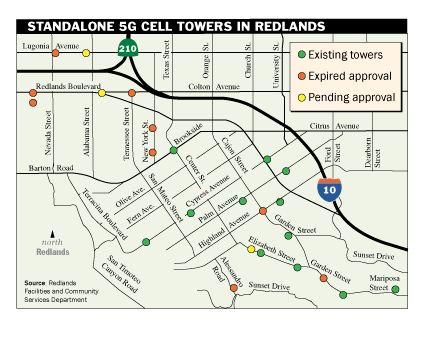 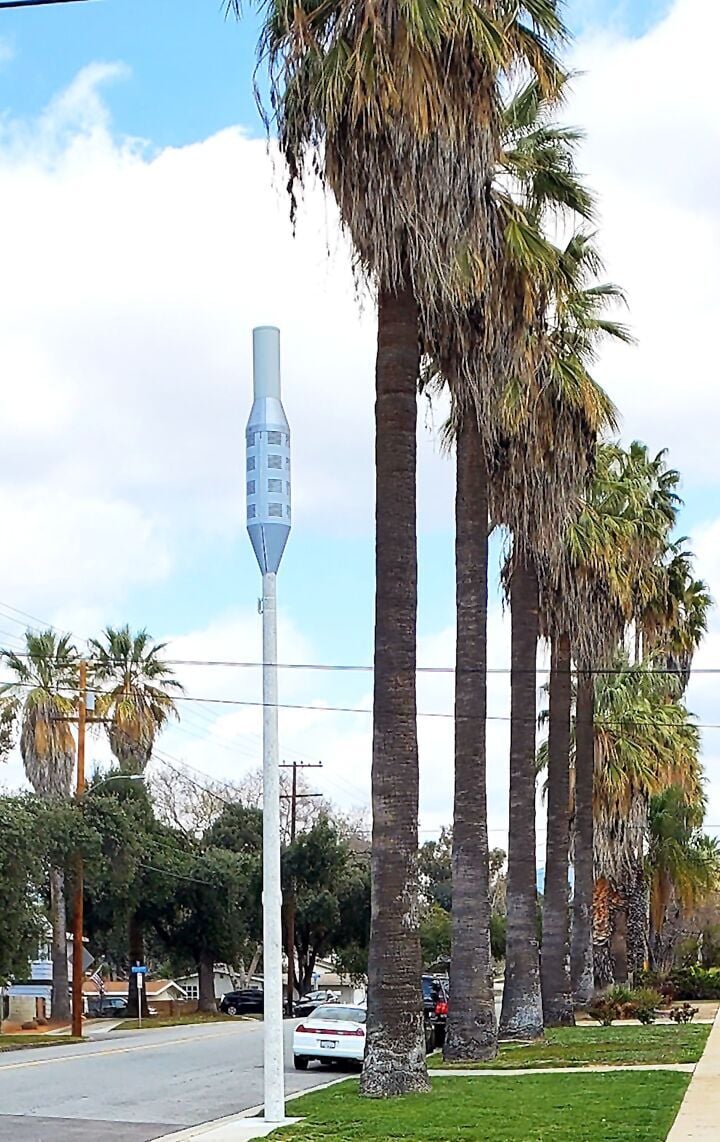 A cell tower at East Palm Avenue and Roosevelt Road.

Today there are no operational Fifth Generation (5G) towers in Redlands.

According to Chris Boatman, facilities and community services director for the city of Redlands, there are 12 standalone facilities or otherwise not connected to existing city facilities such as light poles. Additionally, there are three pending permits for facilities not yet built. The towers are functional, but none of them is for 5G technology at this point.

The map provided by the city shows there are no standalone towers in North Redlands.

Verizon, one of the leading providers of internet service, lists 67 cities that are using full 5G technology. Five are in California, including San Diego.

A year and a half ago the Redlands City Council, by a vote of 3-2, reluctantly gave the green light to communications companies to install cell towers in the city’s public right-of-way.

A coalition of citizens against cell tower construction expressed concerns about potentially negative health effects that the facilities might emit if installed near schools and residences. They urged the council to exert its powers of local control to dictate where the facilities could be placed.

However, a 2018 Federal Communication Commission (FCC) rule granted telecommunications companies the right to deploy equipment within the public right-of-way as they saw fit.

Then-Mayor Paul Foster said the council had no choice but to comply with the FCC rule and state laws. Former Councilman and current Mayor Paul Barich suggested that it was “the perfect time for civil disobedience,” indicating that the council should defy the FCC rule and impose local control over placement of the towers to address the concerns of citizens.

Foster cautioned that doing so would open the city up to tens of thousands of dollars in fines and possibly millions in lawsuits.

He noted that U.S. Senators Dianne Feinstein, D-California, and Richard Blumenthal, D-Connecticut, sent a letter to the FCC to stop encouraging wireless carriers to file lawsuits against local communities for not complying with the FCC rule.

He added that he had written and signed a letter on behalf of Redlands residents to join with the U.S. Conference of Mayors in Senator Feinstein’s fight against the FCC’s rules about the deployment of the accelerated broadband equipment.

In December 2019, the FCC adopted the recommendations of expert organizations that reviewed the science and reaffirmed the FCC’S safety standards. The FCC confirms, “…there is no evidence to support that adverse health effects in humans are caused by exposure at, under, or even in some cases above, the current RF (radio frequency) limits. Indeed, no scientific evidence establishes a causal link between wireless device use and cancer or other illnesses.”

According to the American Cancer Society, “…the energy level of radiofrequency (RF) waves is relatively low, especially when compared with the type of radiation that are known to cause cancer risk, such as gamma rays, X-rays and ultraviolet.”

The Cancer Society also noted that RF wavelengths make it unlikely that energy from them could be concentrated enough to affect individual cells in the body. Even if RF waves were somehow able to affect cells in the body at higher doses, the level of RF waves present at ground level is very low — well below the recommended limits.

“Nevertheless, our local government should have the right to address our citizens' concerns,” said  Barich. “We should be able to make sure these facilities are placed at a proper distance from residences and, especially, schools.”

“The issue is not about advancing technology, which we know is beneficial to our community. In fact, they’ll probably be coming up with 6G before long,” he added. “The issue is about local government representing our citizens and providing solutions to alleviate their concerns.”

The evidence (of cellular telecommunications safety) consists of thousands of peer-reviewed studies conducted over 70 years by independent scientific organizations.

For a roundup of organizations and their individual statements about cellular technology safety: Visit wirelesshealthfacts.com

Status: Read twice in the Senate. Never voted on.

Earlier in 2019, on Jan. 14, HB530 — Accelerating Broadband Development by Empowering Local Communities Act of 2019 was introduced in the U.S. House of Representatives and supported by U.S. Rep. Pete Aguilar, D-Redlands.

Status: Assigned to House Subcommittee on Communications and Technology. Failed on Dec. 31, 2020.

Do you support the proposal to build small homes on most of the 8.8-acre orange grove off West Palm Avenue?