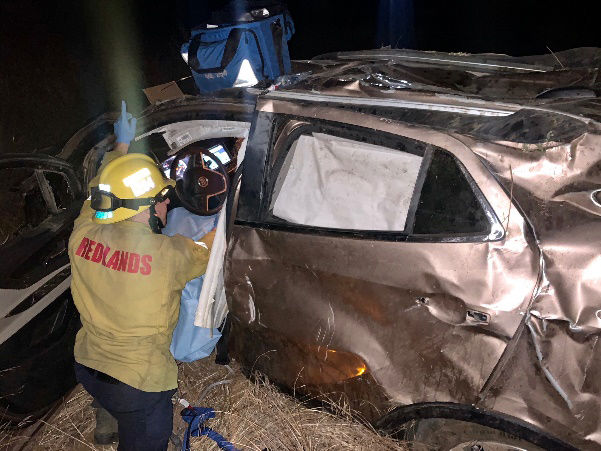 A 56-year-old Redlands woman was hoisted to safety after driving her car off a cliff at Alessandro Road and Sunset Drive Tuesday night.

The San Bernardino County sheriff’s 40King3 helicopter hoisted a Redlands woman to safety after she drove her car off a cliff on Sunset Drive near Crown Street on Tuesday and landed 300 feet into the canyon.

At 6:30 p.m. Oct. 29, Sheriff's Aviation assisted the Redlands Fire Department after personnel determined her car was inaccessible to their rescue vehicles.

Multiple people called reference a single-vehicle traffic accident where the vehicle went off the edge of a cliff and rolled to the base of a canyon.

Sheriff's helicopter 40King3 acted as the hoist rescue helicopter, using a crew member from 40King1. A hoist rider was lowered to the vehicle to assist with securing the victim for a hoist. The victim was hoisted from the narrow canyon and transported to a safe area. Medical personnel took the victim, 56-year-old Teresa Petrilli, to a local hospital with non-life threatening injuries.

Redlands police determined the woman had been driving under the influence of alcohol.