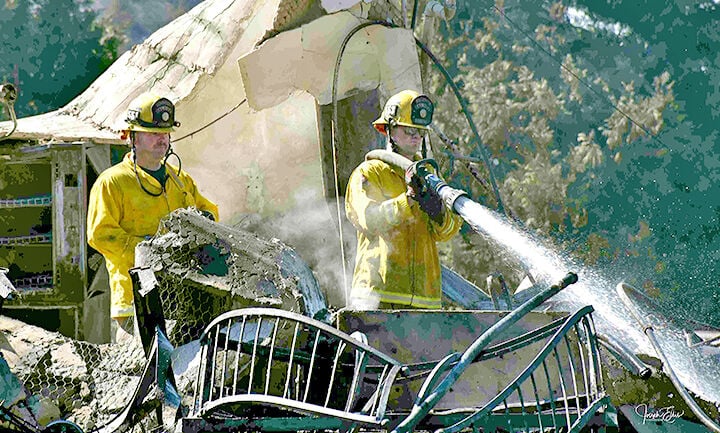 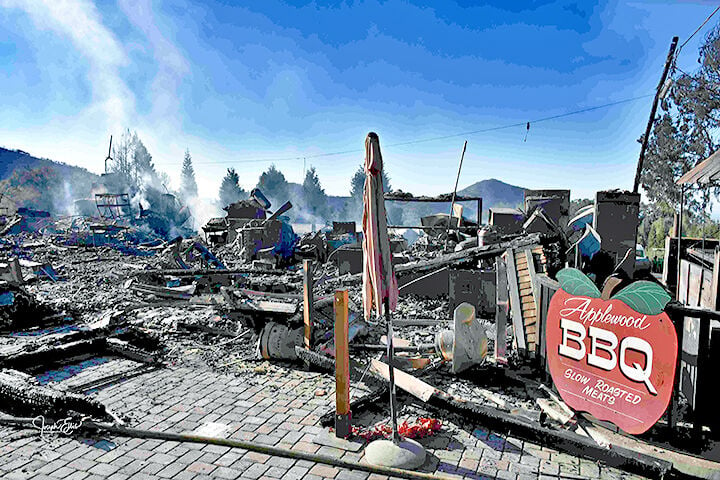 Damage to the historic Los Rios Rancho in Oak Glen has been estimated at between $3 million and $5 million.

An early morning fire destroyed the historic Los Rios Rancho in Oak Glen last week. Damage has been estimated between $3 million and $5 million, possibly caused by a transformer that malfunctioned sometime after 2 a.m. Friday, Oct. 2.

In the early morning hours Doug Chudy of the Wildlands Conservancy, was awakened by his dog, Rholand, who was outside barking at some raccoons rummaging near their home on the Historic Los Rios Rancho property. Chudy looked outside, noticed some eerie sparks coming from the market barn and country store building. He took off to find out what was happening about the same time as his colleague, Tim Krantz, who lives across the parking lot from the building, had also been awakened and called in what looked like a fire coming from the 100-year old building.

As of 10 a.m., Friday, the cause was still under investigation according to Fire Captain Specialist Bennet Milloy with Cal Fire, and the lead fire inspector for this incident. But speculation points to a transformer atop a pole near the rancho’s bakery and cafe, out of which Chudy and Krantz both witnessed sparks flying. Those sparks were igniting combustible materials and eventually swept through the buildings that were built just after the turn of the 20th century.

In 1906, a produce grower and packer from the Pasadena area purchased over 300 acres from the Wilshire family in Oak Glen to expand his operation to include apples.

His name was Howard Rivers and he named his new apple orchard, Los Rios Rancho — “the Rivers ranch.” Rivers went on to plant the largest apple orchards in Southern California, many of which are still in production today! For nearly 90 years, Los Rios Rancho was the place to go for mile-high grown apples.

Then in 1995, according to the Los Rios Rancho website, “The Wildlands Conservancy purchased the ranch from the descendants of the Rivers in an effort to save it from certain development and to retain the rich history and landscape for generations to come.”

The Wildlands Conservancy mission, however, did not include a retail operation, as their focus is to conserve the land and make it available as an outdoor education program that focuses on wildland trails and animal life unique to California and particularly Oak Glen.

So in the winter/spring season of 2004, Devon Riley began negotiations with the Conservancy to allow them to focus their efforts on preservation, development of trails and education while leasing the retail operations and orchards to the Rileys so that the tradition of apple growing and historic entertainment would prevail into the future.

Since then, Devon Riley’s family has taken Los Rios from an apples-only operation to apples, raspberries, strawberries, corn and pumpkins.

The large Packing House Barn in the back was in the planning process of being renovated and restored as a future event venue when Friday’s fire destroyed it.

While open year-round in the store and bakery, the fruit production is seasonal.

Plans for renovation of the Packing House Barn are now a fleeting dream though Devon Riley is confident they will rise from the ashes on a “new slate” and be back soon.

In fact, on Saturday, Oct. 3, the day after the fire, Los Rios was back in business on their north-side “u-pick” operations.

“We’re happy with today’s response,” Sophie Riley said, “We’re about as busy as we were last weekend!”