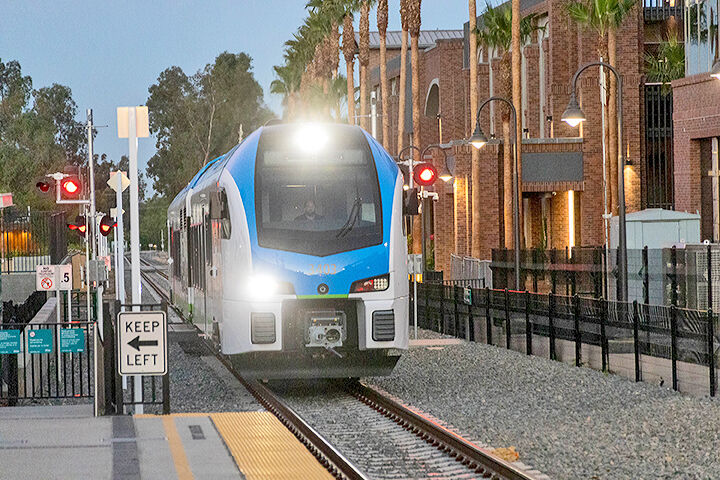 The Arrow Train arriving at the Redlands Station to pick up passengers. 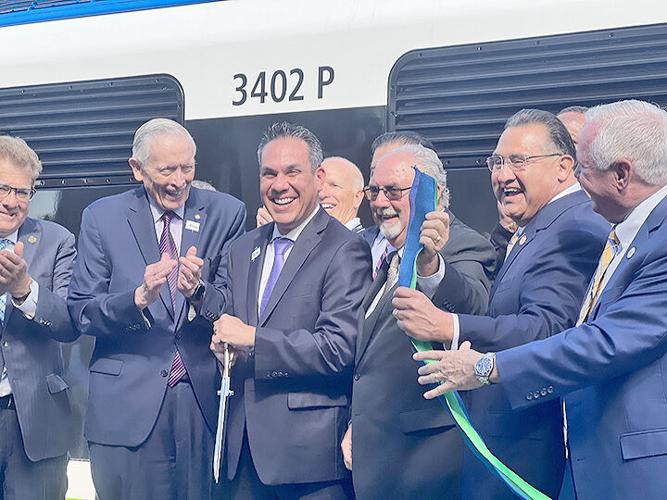 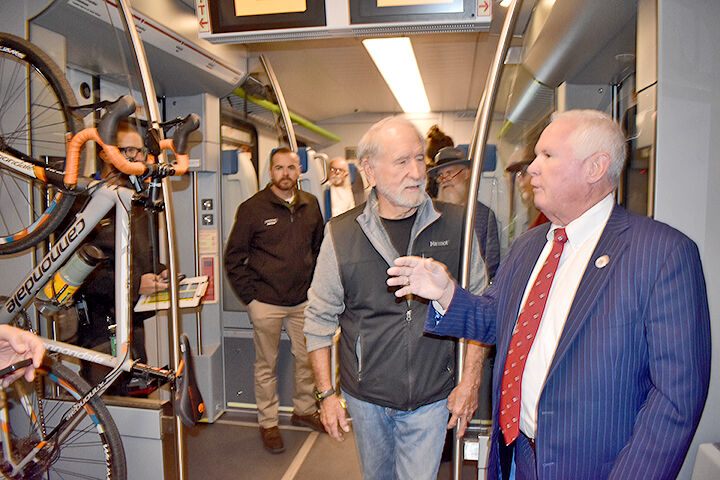 Redlands Mayor Paul Barich, right, was aboard the first train the University of Redlands Station, which left at 6:08 Monday morning.

Riders board the Arrow Train at Redlands’ Santa Fe Depot, which is still being renovated.

More than 300 people crowded into the train station to welcome the new Arrow passenger rail that has spent more than a decade in the making.

Aguilar spoke about his longtime support of the project from the time he was the mayor of Redlands to being a United States Congressman. Aguilar said he felt great pride about the Arrow train’s completion.

Chief Deputy Secretary Edison said that the Arrow train not only connected the Inland Empire but was a step toward connecting the whole state of California.

Redlanders of all ages turned out for the event and were able to tour the sleek, new Arrow train after the ceremony.

The train’s interior features gray seating highlighted by green and blue accents. Many large windows allow for ample natural light and for passengers to see Redlands from a new perspective.

The Arrow train had many eager riders on its first day of service. The first train left from San Bernardino at 5:37 a.m.

Justin Peterson, a conductor for the Arrow train, said his family got up early to ride the train on its inaugural passenger voyage to Redlands and back.

Arrow employees walked through the train scanning customer tickets. Tickets are available at kiosks at every station and online. There are a multitude of ticketing options including monthly passes, one-way tickets, round-trip tickets and $10 weekend passes.

The train, which is powered by small, lower-emission diesel engines, is remarkably quiet (besides the horns).

The train has the capacity to hold 120 standing passengers, eight wheelchair passengers, storage for 12 bikes and USB charging ports at most seats. The train also has seating with tables at the end of each car.

Bruce Laycook rode the train from the Redlands University Station to downtown San Bernardino and back.

The ride takes about 25 minutes including stops at other stations along the way. The roundtrip ticket from the University of Redlands to Downtown San Bernardino was $7.

“Once they can operate without the horns it’s going to be a great ride,” said Laycook.

About those darn horns

Although train service began Monday, the horns noticeably have not stopped.