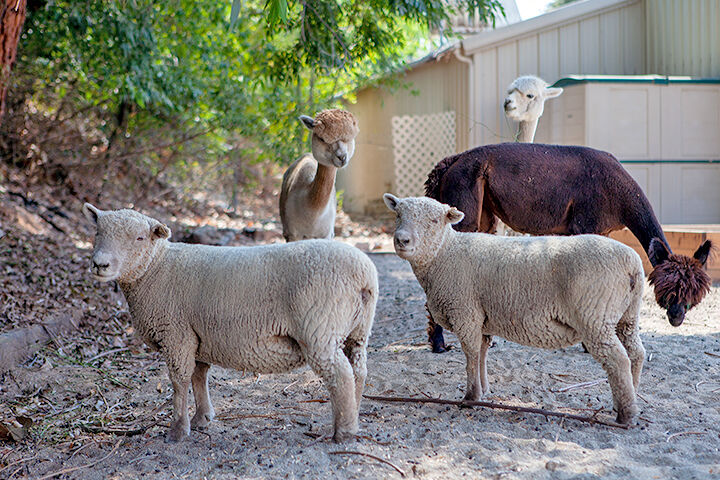 Sheep and other animals from the Luther Glen Farm in Oak Glen are safe at First Lutheran Church in Redlands. 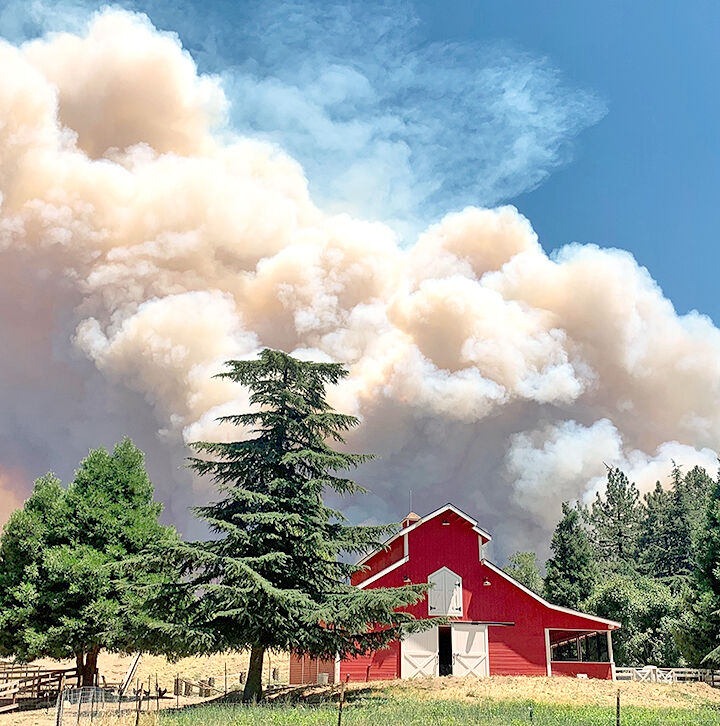 Smoke from the Apple Fire billows Friday afternoon behind he red barn at the 40-acre Luther Glen Farm on Oak Glen.

The sanctuary and other buildings on the campus of First Evangelical Lutheran Church in Redlands have been virtually deserted since the beginning of the COVID-19 lockdown nearly six months ago.

Since Saturday night the church at 1207 W. Cypress Ave. has been a sanctuary for 21 animals and six staff members from Luther Glen Farm in Oak Glen, which was ordered to evacuate during the second day of the Apple Fire that has burned nearly 27,000 acres north and east of the 40-acre farm and retreat center.

“I talked to them on Friday when the fire broke out,” said Pastor Kim Eifert Krogstad. “In a prior year during a fire in the area we discussed the possibility of using the church if an evacuation was necessary. On Saturday, they called and asked if they could bring animals down here so I called Melanie (Hendrickson, church office administrator) to prepare for their coming.”

Glen Egertson, co-director of the farm and the adjacent Lutheran Retreats, Camps and Conferences Center with his wife Lauri, said he received a call from the San Bernardino County Sheriff’s Department about 5:30 p.m. Saturday ordering the complex and neighboring homes and properties to evacuate due to the rapid growth of the fire further east near Cherry Valley.

“We were ready. We had vehicles already in place near the stalls of the barn where the animals are housed. We loaded up in about 30 minutes and we got to the church before 7 p.m.,” recalled Egertson, a member of First Lutheran.

Greeting them were Hendrickson, her daughter Freya, her husband Erick and neighbor Angie Morgan and her roommate.

“They pulled in and we helped them take the animals to the enclosed playground and garden area behind the parish hall. We carried the baby goats. In all, there were three alpacas, four sheep, 11 goats and three dogs,’’ Hendrickson said. About 100 chickens were left behind at the farm along with some pigs.

“One of the neighbors behind the playground heard one of the goats and came over,” Egertson said. “She joked that it was too early for a Christmas creche so she couldn’t figure out the noise.  She was very happy the church was helping us out.”

The animals settled down after dark and were quiet once the external security lights were turned off, leaving the area in total darkness similar to nights at the farm.

The six staff members were put up in the Fireside Room and the main Parish Hall. Air mattresses and bedding were set up along with a TV to watch movies.

The staff brought fresh eggs from the farm to cook up in the kitchen. Several members of First Lutheran provided snacks, beverages, donuts as well as lunch and dinner on Sunday and Monday. Another church also donated to the cause.

Nearby shrubbery was found by the goats to be edible as well.

A portable structure provided shade for the animals during the daytime heat.

On Monday, some of the staff made the 16-mile drive back to the farm to feed the chickens and pigs and pick up some necessities that were left behind in the rush to evacuate on Saturday.

However, on Tuesday morning, emergency operations officials advised those who did evacuate the Oak Glen area to not return in case a flare-up of the blaze caused another evacuation order. So, it may be later this week before the evacuees can return.

Meanwhile, members of First Lutheran have generously provided plenty of food for both staff and animals.

“The generosity of our members has just been amazing,” said Pastor Krogstad. “God is good.”

First Lutheran and Luther Glen Farm, like many other religion-based organizations have experienced a tough six months since the onset of COVID-19 with social distancing and masking requiring the lockdown of regular church services and cancellation of spring and summer camps, outdoor school programs, and environmental education programs as well as retreats and conferences at Luther Glen.

Pastor Krogstad, who serves as president of the LRCC Advisory Board, said the farm and El Camino Pines, the other outdoor ministry operated by the LRCC under the auspices of the Pacifica Synod of the Evangelical Lutheran Church in America, have suffered financially from the loss of income from fees and donations since early March.  The two camps normally generate $200,000 from individual contributions and $100,000 from Synod congregations to maintain operations.

For the first time ever, LRCC conducted its 11th annual Summer Banquet virtually via the internet rather than an in-person gathering for donors and supporters of the ministry.

LRCC received a payroll protection plan grant to offset loss of income and protect staff positions but that grant will soon run out, she said. The board will meet Thursday night to discuss potential cuts to payroll and staff furloughs.

Luther Glen continues to operate a huge vegetable garden and contributes produce and eggs from its chickens to the Yucaipa Food Bank and Central City Lutheran Mission in San Bernardino as part of its sustainable garden project.

“The animals have to eat and we need water to irrigate the vegetable gardens,” said Pastor Krogstad.

The Apple Fire, which has burned more than 42 square miles and destroyed 12 structures, was …

California Gov. Gavin Newsom has announced that the state has secured a Fire Management Assi…