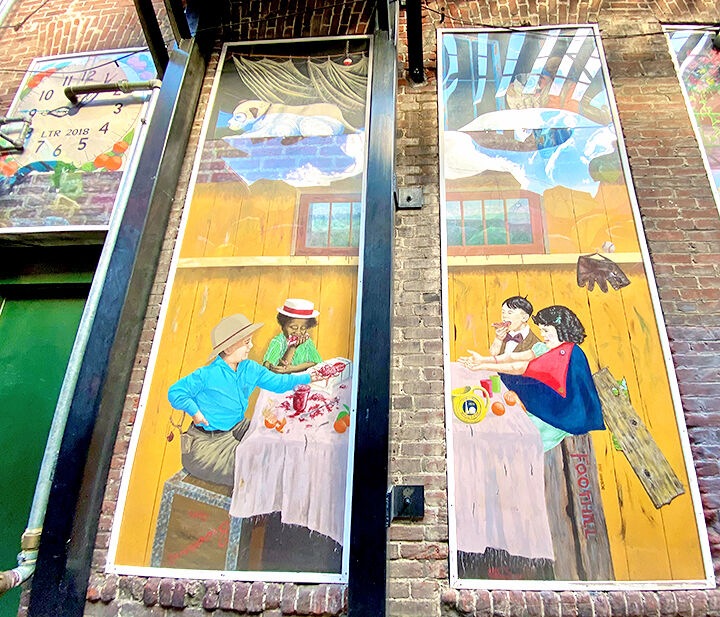 The Little Rascals eat lunch in their clubhouse.

The second scene shows the Little Rascals gathered around a piano. 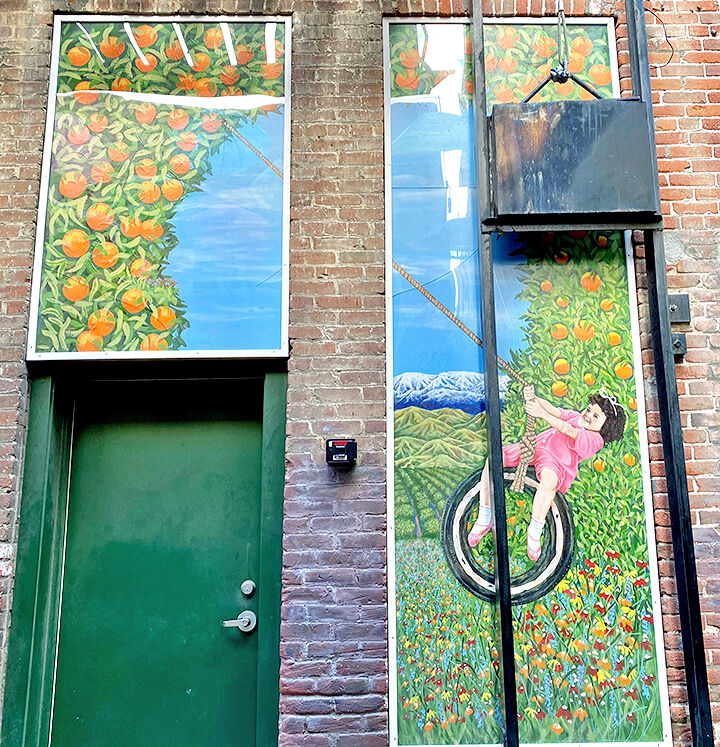 The final scene pays homage to Redlands and its oranges.

Local philanthropist Tim Rochford, who owns two of the buildings in the alley, commissioned Dierdorff a couple of years ago to brighten the walls.

“Tim asked me to paint the Little Rascals, and I was happy to do it,” said Dierdorff. “I’ve worked with him before, and he always has interesting ideas but wants me to do it my way. “Whenever I do pieces for Tim, I sneak in his initials.”

Each Little Rascals painting has the hidden letters. In the first piece in the series, Dierdorff painted a clock with Rochford’s cat sleeping underneath. The image leads into the clubhouse scene with the Rascals eating.

“The space I had to fit the boards on is 11 feet high and 3 feet wide,” said Dierdorff. “Standard boards are only 8 feet tall, so because the space is 11 feet, I had to add Petey the dog to the top of the image.”

The clubhouse scene features a variety of bright colors that Dierdorff selected.

“The original image is in black and white, so I chose colors I thought would fit.

In the clubhouse scene, I added oranges to the table as a homage to Redlands. I had to research what type of bread they would have had back in the 1930s so I could paint it accurately. One of the boxes they are sitting on references the old Brookside Dairy on Barton Road where Stater Bros. is now. The other box references the Foothill Groves in Redlands.”

Dierdorff said he wanted to make the clubhouse look like a kids’ space.

“I made it look dirty, put a hole in the window and added a baseball glove hanging in the back.”

The next scene shows the Little Rascals around a grand piano.

“I was stumped for what to put in the space above the boards,” said Dierdorff. “I remembered that a lot of Tim’s properties have metal grates in front of the windows, so I painted that with some flowers to fill the space.”

Dierdorff said he didn’t want to leave the space on top of the piano open either.

“I wanted to fill it with something,” he said. “I don’t like painting with black, so I wanted to add to it. In reference to the era, I added a photo of Franklin Delano Roosevelt, a yo-yo and some marbles. My wife gave me the idea to add the lace and vase of flowers. Of course, the mountains outside the window are a reference to Redlands.”

In the last scene, Dierdorff said he had to figure out how to get around the door of the building.

“I wanted to be able to connect the paintings,” said Dierdorff. “So I painted Darla on a tire swing and made the rope pull the two pieces together.”

Dierdorff painted everything at home then had someone install the boards in the alley.

“It took a few years to complete,” he said. “But I think it came out pretty good.”

Have you gotten your COVID-19 vaccination yet?