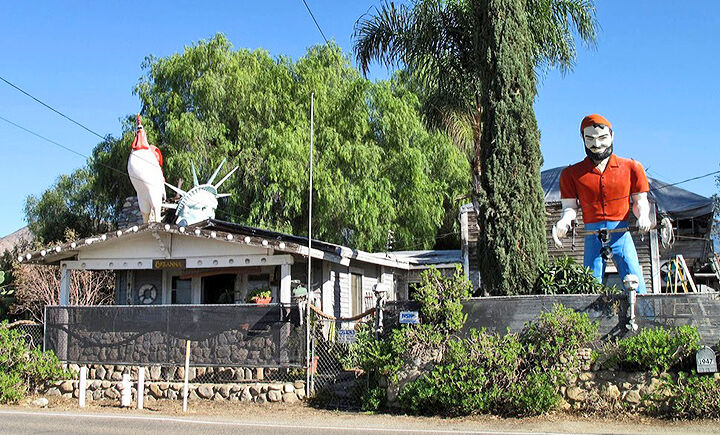 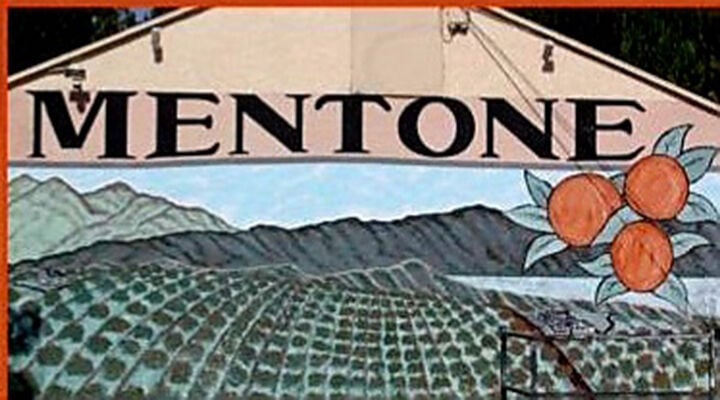 If you want to visit the cities on the French Riviera, the Italian Mediterranean coastline and other European resorts without leaving Southern California, all you have to do is drive the east-west streets of Mentone. You’ll be visiting Anzio, Bath, Brighton, Capri, Madeira, Naples, Nice, Salerno, to name a few, and, of course, Menton, the town namesake.

The French Riviera in the south of France on the Mediterranean Sea began in the 18th century as a health retreat, and Menton, which is near the Italian border, close to Monte Carlo and about 20 miles from Nice, is acclaimed as having the best climate on the Cote d'Azur.

An early explorer to the undeveloped area east of Redlands noted a similarity in climate and vegetation to Menton, France, and that’s how Mentone, California, added an “e” to the name. Another attractive feature of this area was the rich, sandy soil and the mild climate which, even at an elevation of 1,800 feet, was relatively free of frost and fog.

Today, Mentone is a quaint unincorporated town with a population of about 10,000. It prides itself in its laid-back, semi-rural lifestyle, and its independent spirit. As it celebrates its 135th anniversary this week, we take a look at the past and uncover a glorious history for what today seems like such an unpretentious little town.

In his paper for the Redlands Fortnightly Club, “A Tale of Two Cities,” A.R. Schultz Jr. explains,

“It (Mentone) was so named because the owners hoped to make it the health spa of California, such a resort as the Menton of France had become. The climate and vegetation were similar, but, alas, there was no Mediterranean Sea.” (But, hey, there is Mentone Beach! Read on.)

The climate was good for sunshine and fresh air, a health benefit for those suffering from asthma, tuberculosis and other lung afflictions.

The climate and soil were also excellent for growing various types of fruit including olives, peaches, apples and grapes, but citrus — especially oranges — eventually became the lifeblood of the community.

The area is also covered with white boulders and rocks, and a special kind of sandstone later known as Mentone Stone. Today, Mentone’s slogan is “Oranges on the Rocks.”

The climate, the soil, the water and even the rocks played their parts in the development of the Mentone area.

Myron Crafts and family were early settlers to the area in 1862. Their Altoona Ranch was located at what is now the area of Crafton and Colton avenues. In 1873, Mrs. Craft opened “The Retreat” as a health resort for invalids suffering from lung afflictions. One of those patients is said to have named the small community “Crafton.”

According to Tom Atchley, president of the Redlands Area Historical Society, “Mentone actually began from a failed lumber-flume business in the San Bernardino Mountains.”

Atchley notes that beginning in 1875 entrepreneurs were exploring the Santa Ana Canyon for sources of water and fuel wood for the approaching valley railroads.

Enter William P. McIntosh who is recognized as the primary founder of Mentone. He had managed the lumber operations of Hobart, Marlette and Tiffany before moving to Los Angeles. He bought 320 acres of land in the Mentone area in January1885, and his son Richard bought 160 acres in June1885.

According to Gertrude Hagum, author of “William P. McIntosh 1849-1930, a Founder of Mentone, California,” Mentone-Greenspot-Crafton Area Historical Group Paper No. 3, 1986:

“In 1884, McIntosh filed a claim on ‘the underground flow of Mill Creek,’ and in partnership with several others started the Mentone Irrigation Co., which brought water to an area described as ‘a wild desert land.’”

In 1885, the Santa Fe Railroad arrived in San Bernardino through the Cajon Pass providing a new connection to the outside world for the valley. There was a rate war between the Santa Fe and Southern Pacific Railroads during 1886, creating a boom in population.

Fares dropped so low that it was cheaper to travel than to stay at home,” wrote Kay Beattie in “The Kite Shaped Track,” a publication of the Highland Area Historical Society.

McIntosh was one of the directors of the new Mentone Co. along with Malette and Hubbard. Henry L. Drew was president and N.K. Fairbanks was vice president. The Mentone Chamber of Commerce identifies this company as “a subsidiary of the Santa Fe Railroad.” In addition to the McIntosh and Hubbard private land, in 1886 the company bought 3,000 acres east of Wabash Avenue and north of Colton Avenue in Redlands

And then the advertising began. McIntosh and company touted the new town of Mentone for its fertile soil, healthful climate, pure-water supply and nearby mountains. They claimed it to be the perfect place to grow oranges, lemons, limes, grapes, apricots, pomegranates, olives, walnuts, dates, bananas, apples, pears, quinces and plums. Early advertising proclaimed “Sunshine, health and opportunity.”

In his Fortnightly Club paper, Schultz said, “With climatic (sic) second to none in California for the culture of oranges, it was inevitable that the orange should become the very life of the community.”

Mentone’s course was dramatically altered when the Redlands Electric Light & Power Co. used Mill Creek to create the Mill Creek No. 1 hydroelectric generating plant in 189, the first in the world to implement three-phase alternating current. Power was sent to Redlands and the water to agricultural uses there.

Additionally, a severe drought had taken its toll on the orchards, and people began leaving the town.

Large tracts of land were laid out for orange groves, and McIntosh is said to have planted the first Mentone orange orchard in 1888. The Mentone Heights Orange Co. was established in 1906. In the 1930s, there were more than 4,000 acres of orange groves in the area. Today the orange industry survives with the town shipping about 1,000 cars of oranges per year. This year Mentone took the top prize for its display at the annual National Orange Show in San Bernardino.

Mentone also is famous for its honey-colored sandstone. Its first building (1887) housed a sandstone quarry business in Mill Creek Canyon. Because of its incredible strength (withstanding a pressure of 6,600 pounds to the square inch), Mentone stone was used to pave a number of streets in Los Angeles, and to build the breakwater at San Pedro, as well as a courthouse, and a number of other projects. It can still be seen around Southern California today. The stone actually came in two colors — the honey-buff color that was used for trim, and greenish-gray that was used in construction.

The much-anticipated California Southern (Santa Fe) railroad arrived in Redlands on February 13, 1888, and in Mentone by May as the kite-shaped track continued construction across the Mill Creek wash toward Highland. Passengers could then travel between San Bernardino, Redlands and Mentone.

Trains delivered freight and mail. The new platform for the Santa Fe at Wabash and Colton avenues was completed and named the Montezuma Crossing. The Victorian-style Mentone Santa Fe Depot was the eastern terminus on the kite-shaped track and was just three blocks from the new hotel.

Keeping some acreage on the corner of Crafton Avenue (Ruby) and Mentone Boulevard for himself, he offered much of the land at 10% cash down and the balance in six to 10 years at 6.5% interest. He sold some lots at half price if the buyer agreed to build a house worth $1,000 ($28,187 in today’s money).

By 1891, Mentone had a general store, a blacksmith shop, a boarding house, a livery stable, and a number of small homes. The Mentone Post Office opened May 15, 1891, and in December McIntosh began building the Mentone Hotel on the east side of Opal Avenue.

Where the hell is Mentone Beach?

“It sounds like a beach, you’re expecting a beach, but it’s really not a beach at all.”

Several famous people lived in Mentone in its earlier days. Here’s a couple of stories from …