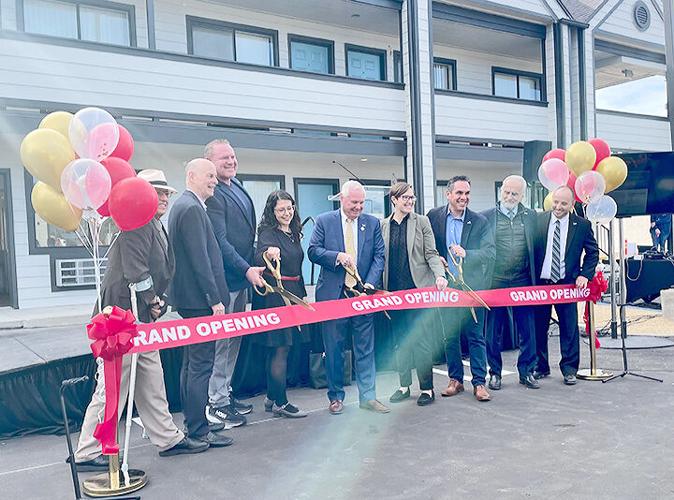 Redlands Mayor Paul Barich, surrounded by other dignitaries, cuts the ribbon for the city’s new home for the homeless. 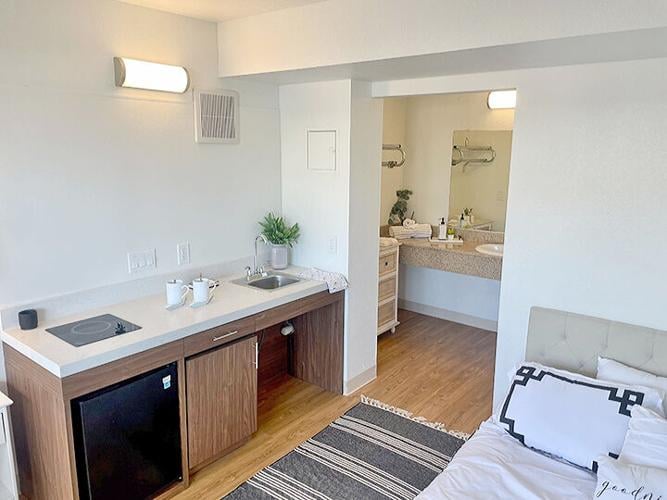 Shangri-La Construction renovated the old hotel and added a kitchenette to each apartment.

Of the more than 100 spectators at the ribbon cutting event, many representatives were in attendance from the organizations that brought the vision to fruition including Shangri-La industries’ Andy Meyers, Fernando Torres-Gil the Step Up board chairman, Philip Mangano from American Round Table to Abolish Homeless, U.S. Rep. Pete Aguilar and Sasha Kergan of the California Business, Consumer Services and Housing Agency.

Redlands celebrated a step up toward helping the homeless population in the city on Friday, Dec. 16.

The ribbon-cutting ceremony marked the opening of the Step Up housing project that will provide homes for over 100 chronically homeless people from Redlands. Previously the space at 1675 Industrial Park Ave. was known as the Good Nite Inn. California awarded grant money to Redlands as part of the Homekey Round 2 program administered by the California Department of Housing and Community Development.

“Homekey is changing thousands of lives statewide because of local leaders like the city of Redlands,” said Newsom who attended the event virtually over Zoom.

The impressive project was completed in just four months.

The units were renovated by Shangri-La Construction, which added a kitchenette to each apartment. Improvements were made on every aspect of the building including paint, sewer and upgraded piping, parking lot, as well as new furniture and decor transforming the motel into an apartment building.

Many local nonprofits that aid the homeless population came to witness the exciting milestone for Redlands.

Organizations such as YouthHope, Inherit the Earth Outreach, Family Service Association and Redlands Charitable Resources Coalition were recognized during the ceremony for the work they do that has been consistently giving hope to those they encounter.

Heidi Mayer, executive director from YouthHope, said she has witnessed firsthand the hopelessness of the people living on the streets. She said that this project will offer an opportunity for some to move forward.

One of the biggest concerns was if the support would reach the Redlands citizens who are chronically homeless. Step Up representatives and Redlands Homeless Solutions Coordinator David Rabindranath said, “Ninety percent of the units have been approved for Redlands citizens.”

He added that around 120 people will be inhabiting the apartments as couples and single parents with one child are accepted.

Aaron Criswell, chief housing development officer, said, “Our aim is to serve the people of the city we’re helping.”

San Bernardino County has a 2-1-1 coordinated entry system. However, the city was able to implement priority housing for Redlands residents with a local preference system.

U.S. Rep. Pete Aguilar, who secured the $24 million for the Redlands project, was beaming as he greeted his friends from Redlands, including Mayor Paul Barich, Councilwoman Denise Davis and incoming Councilman Mario Saucedo.

During his speech Aguilar stated, “I will keep delivering for the Inland Empire so we can alleviate homelessness and implement more solutions like this.”

The numbers of unsheltered people and sheltered people experiencing homelessness are collected every other year by agencies or volunteers through the Point-In-Time-Count and accuracy is dependent on several variables.

On a day in winter, volunteers conduct the count of those visibly unsheltered and record the data on digital applications. The count is conducted in winter because more people rely on shelters due to cold weather. The count is likely to miss counting those who are inhabiting vehicles, homeless but residing in a home, or residing in more hidden areas.

According to a CalMatters analysis, those numbers were impacted in the most recent attempt in 2022 as the Omnicron variant was at its peak and technical glitches were reported from user error and poor internet connection.

Redlands engaged with around 220 individuals who are homeless in the area and seeking housing according to Greg Coffos, director of Inland Empire Housing Services at Step Up.

The next Point-In-Time-Count is scheduled for Thursday, Jan. 26, and volunteers are needed. To register or for more information visit https://sbchp.sbcounty.gov/community-projects/point-in-time-count/

Step Up on Second Street Inc. is a Los Angeles-based organization that provides programming and supportive services to chronically homeless who inhabit their residences. What began in Santa Monica in 1984 as a mental health resource, has expanded to nationwide housing and support solutions.

The California Homekey initiative that began two years ago now has 12,676 units of space inhabited by chronically homeless people.

A former mayor of San Francisco, Newsom reflected on the issue of homelessness in which California had no progressive legislation before his commitment as governor saying, “I’m deeply cognizant of the crisis that is homelessness all across California.”

He thanked Redlands for what he said was incredible leadership.

Of the more than 100 spectators at the ribbon cutting event, many representatives were in attendance from the organizations that brought the vision to fruition including Shangri-La industries’ Andy Meyers, Fernando Torres-Gil the Step Up board chairman, Philip Mangano from American Round Table to Abolish Homeless, U.S. Rep. Pete Aguilar and Sasha Kergan of the California Business, Consumer Services and Housing Agency.