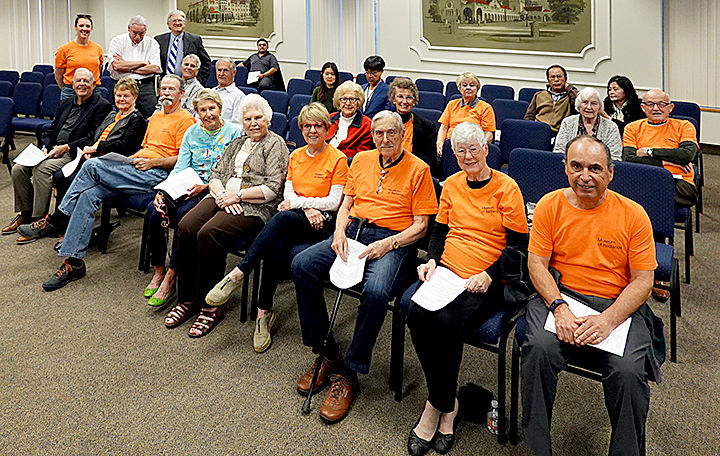 Supporters of the Museum of Redlands, many in the orange museum shirts, attended Tuesday’s Planning Commission meeting to witness the approval of their plans for a new place to celebrate Redlands history.

After more than two decades of planning, the Museum of Redlands is a step closer to becoming a reality after the Redlands Planning Commission approved plans to construct an additional building, remodel the façade of the existing building, and construct an outdoor events garden at 700 Brookside Ave.

The unanimous decision on Tuesday, Jan. 28, allows the Redlands Historical Museum Association to renodel the existing 14,068-square-foot building purchased in 2014.

The garden event center will serve as an ancillary component of the museum and will facilitate meetings as well as evenings or weekend activities that relate to the museum, said project planner Loralee Farris.

For two decades, the board of trustees of the A.K. Smiley Library, in collaboration with its affiliated support organization, the Redlands Historical Museum Association, has proposed a new historical museum.

The museum will provide educational exhibits for all ages along with a variety of programs and technologies to showcase the history of Redlands. It will be a resource for school-age children in support of California and national curriculum requirements.

The decision came after  Jack and Laura Dangermond, founders of Esri, donated $3 million to the museum’s building fund.

Danielle Trynoski, who has worked in the capital fundraising campaign, told the commission the museum will increase the quality of life of local residents and will contribute to the local economy as other museums around the nation do.

According to the American Alliance of Museums, each year more than 850 million visits are made to U.S. museums directly supporting 372,100 jobs and generating $15.9 billion in income.

In 2016, museums contributed $50 billion to the U.S gross domestic product.

The Museum of Redlands will create two full-time positions, a curator and an administrative assistant, two part-time employees and dozens of volunteer positions, said Don McCue, A.K. Smiley Public Library director. It is expected that about 25,000 people will visit the museum yearly, he said.