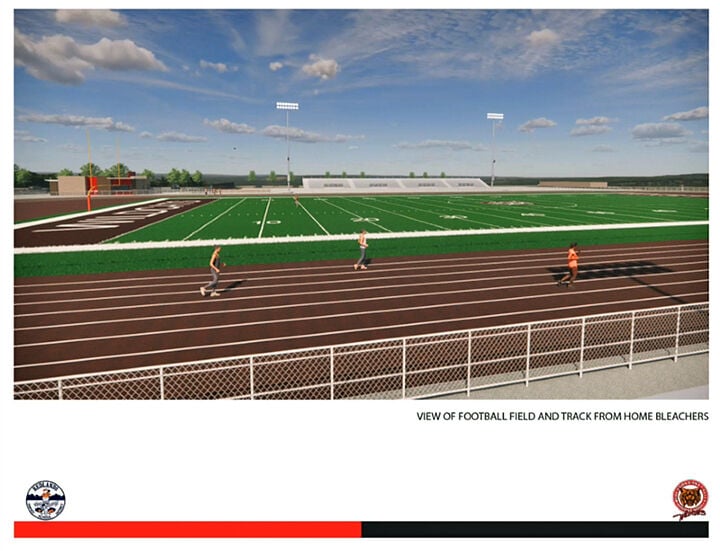 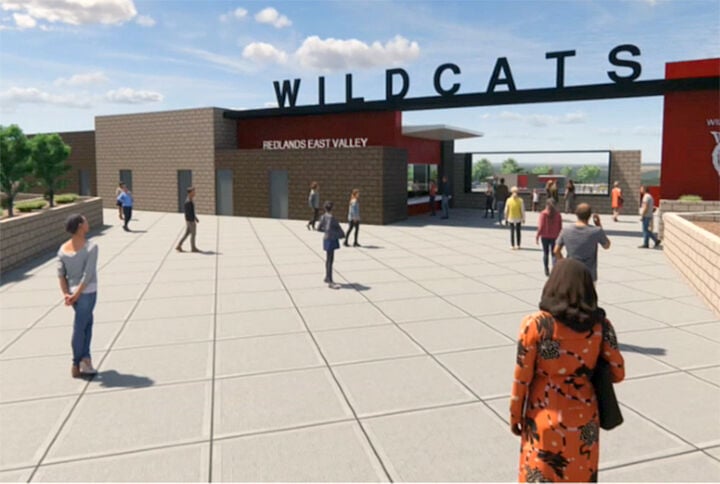 Redlands Unified is planning to build Redlands East Valley’s stadium in three phases. The Board of Education received an update during its meeting on Tuesday, Jan. 12.

“These are proposed plans, so things could still change,” said Jason Hill, assistant superintendent of business services. “We modified the original plan and will build in three phases. Each phase will cost $4 million to $5 million. The district is prepared to undergo phase 1 with our secured funding. The other two phases will need to happen in subsequent years until we find additional funding.”

Phase 1 will begin by moving the existing track and field.

“It is a physical move a little to the west and north,” said Hill. “Then we will lay down the infrastructure under the track, which consists of electrical, sewage and water and then build on top.”

“We will also retain the existing parking lot,” said Hill. “The only time the school will not have use of this area is during Phase 1 construction. We will move games and practices. From start to finish, construction should last about 10 to 12 months. We will attempt to put in lighting during phase 1, but that is determined by funding.”

Phase 2 consists of building out the stadium. Home side seating, visitor side seating, re-striping the parking lot and landscaping are all in the second phase. The stadium will hold 3,500 spectators.

“The only buildings installed in this phase will be ticket booths,” said Hill. “We will also lay a 20-foot-wide concrete drive allowing for a firetruck to pull in and access the fire hydrant. This area is also for paramedics during games.”

Phase 3 consists of constructing home and away side buildings and restrooms, and building out the stadium’s front.

“This is exciting,” said Board Member Alex Vara, “I can’t wait, and I hope we can find funding to get everything done as soon as possible.”

The board voted to accept protocol for the third phase of the district’s return to athletic participation. The third phase allows for outdoor practices only and for some shared equipment such as passing a ball between teammates. Should the county lift the restrictions on gyms and fitness centers, practices could go indoors.

Under new CIF guidelines and county restrictions, the only sport that could be allowed to compete in season 1 after Jan. 24 is cross country.

“San Bernardino County is still in the Widespread purple tier,” said Pat Hafley, district athletic director. “The sports allowed under the purple tier are cross country, golf, swimming, tennis, track and field. All of those sports except for cross country wouldn’t start until March.”

“We would compare times after teams run the same course,” said Hafley. “Everyone would wear masks.”

President Patty Holohan wanted to clarify that the school board was voting to approve the new protocol, not to start competition or practices.

Board member Vara was the only dissenting vote, attributing his hesitation to the rise in COVID-19 numbers across the county.

“There have been 16 cases of COVID-19 in our athletic cohorts,” he said. “I think we are jumping the gun and should wait.”