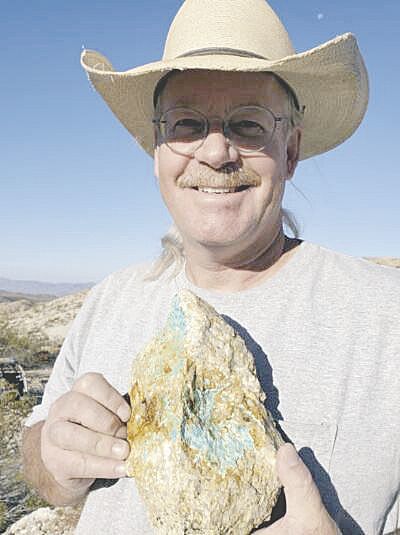 James Bowden displays some of the raw material from his turquoise mine “someplace in California.” 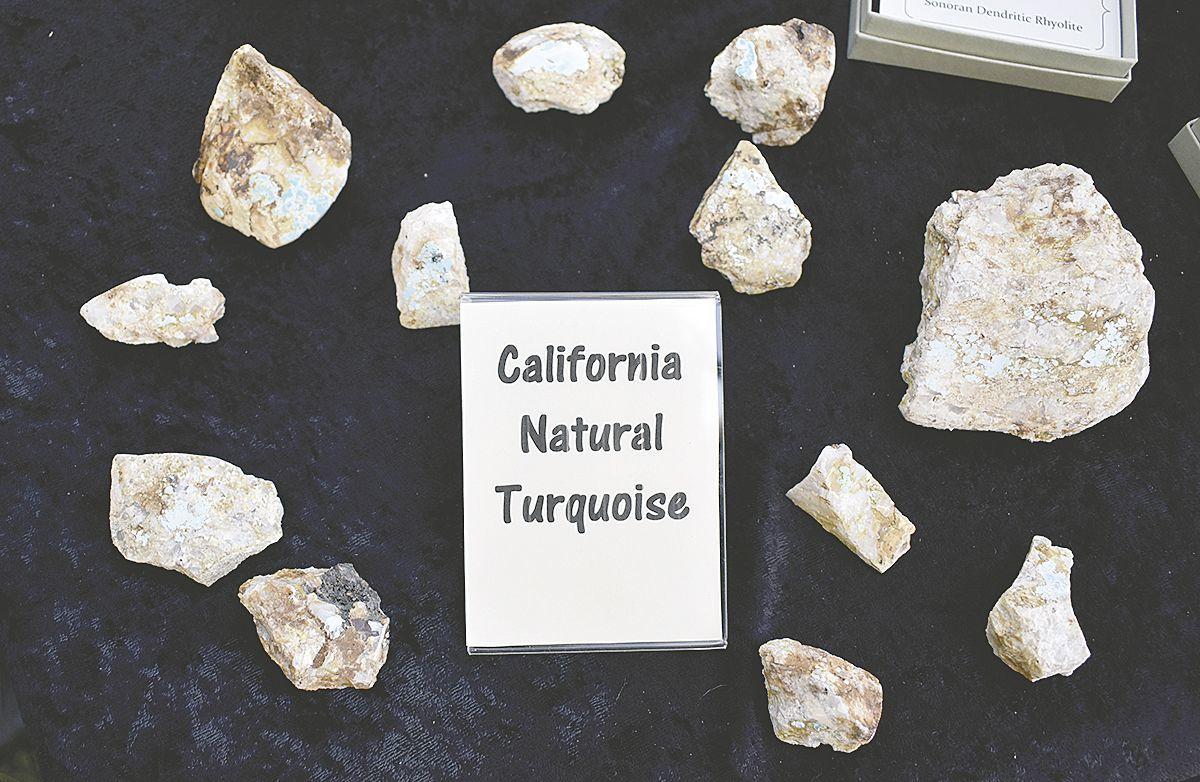 James Bowden had pieces of rock imbedded with turquoise for sale at Saturday's Red Dirt Festival in Smiley Park.

Jim Bowden’s work reads like that of a scientific renaissance man. He is an Indiana Jones-like character who forges his own artifacts of historical legend to be discovered and treasured and worn.

One look at his physiognomy and you can tell he has dug in the dirt of experience and pulled out the fossilized importance of the past. A once park ranger turned biologist, archaeologist, paleontologist, flint-knapper and silversmith, now mining his own turquoise in the desert, Bowden is a testament to the interests of our youth that, layer upon layer, serve as the sedimentary foundation we build ourselves on and, over time, a metamorphosis into who we become.

Bowden went on to take archaeology courses and later became a paleontologist at the San Bernardino County Museum when he transferred to UCR. Bowden later worked at the Diamond Valley site in Hemet where new species of deer were discovered.

“That was my favorite job I ever worked on,” he said. “There was so much stuff. I was collecting fossils out there running around 1993 to about 2000, 2001. And we didn't know it was going to be a new species. When I collected it, I didn't even know for sure what it was because a lot of times these are locked up in the dirt.”

Recently, Bowden, also a flintknapper for more than 35 years and rockhounding aficionado, was approached by longtime friend and fellow rockhound, Walt Harrison, to go in on a turquoise mine claim with him.

“Walt asked if I wanted to partner with him on it. I mean, it was kind of like beyond my bucket list. To have my own turquoise claim would be like a dream come true,” said Bowden. “I don't have many things on my bucket list and that was one of them I thought, you know, ‘It’d be really neat to find turquoise to make some jewelry from it.”

Jackrabbit Wash Mine was born. The name itself is derived from the experience on their first time out surveying the mine.

“We kept seeing Jackrabbits all morning so naturally we called it Jackrabbit Wash Mine.”

Some of the newer jewelry made by Bowden is a product of his own sweat toiling in the earth. The California turquoise found in his necklaces are from his mine that he himself and Harrison worked on and pulled out from the earth, polished and set in silver he crafted.

“I’ve been fascinated how you can start out with the raw material, how Native Americans lived. Everything we have still comes from raw materials and a lot of things you can actually still make with it. Just in our minds it seems beyond that because we've lost touch with it,” Bowden said. “And so to be able to go out there and collect the turquoise and then polish it and then take basic silver and create the setting and everything and make a finished piece and go from start to finish with, it just fascinates me.”

Each piece of jewelry and flintknapp created by Bowden comes with a story — either one of his own or one of historical importance. There is always something to be learned from his work. A natural teacher, artist and explorer, there is a light in Bowden that shines forth from his eyes as he explains the experience on how the piece came to be.

It’s not just jewelry you’re purchasing, but something from the deeper well of human experience and the natural world we inhabit, some locally, others from a time still being unearthed, such as Broken Thumb Jasper that implies a tale of rockhounding gone wrong, or Antique Roman glass and Vesuvianite, a combination of hand-blown glass from 1,500 years ago and the natural gems found near the volcano that smothered Pompeii in ash.

Bowden recently became part owner of a turquoise claim. He was not specific about where it is, saying only that it’s in California. “It has a beautiful robin’s egg blue to it,” he said. Turquoise is found in dry desert areas that has some water and has copper source. He looks for chrysocolla, azurite or malachite. A friend tracked the claims for turquoise mines and found one that hadn’t been renewed by its previous owners. They jumped on it.

The stories behind his jewelry inspire Bowden and intrigue his potential customers. “Without the story, it’s just nice jewelry,” he said. “Now this one here, it’s a piece of fossil wood, but it’s still wood even though it’s 30,000 to 50,000 years old. It’s considered to be the oldest workable wood on earth.” The wood is from New Zealand

“A then here’s one from Redlands,” Bowden said. “That one’s really neat because it’s mining slag from Kaiser Steel in Fontana.” When Kaiser Steel went to shut down a lot of its business, it needed to do something with slag material, which is the part that didn’t become steel. “Some of that was glassy material that was blues and greens and root beer color pieces,” he said. “They took some of that slag and incorporated it as balustrade along the railroad through town.” He picked up pieces along the long-abandoned tracks. “Now that they’re redoing the tracks, they hauled out all of the balustrade and got rid of it. It’s no longer here. I knew that was coming.”