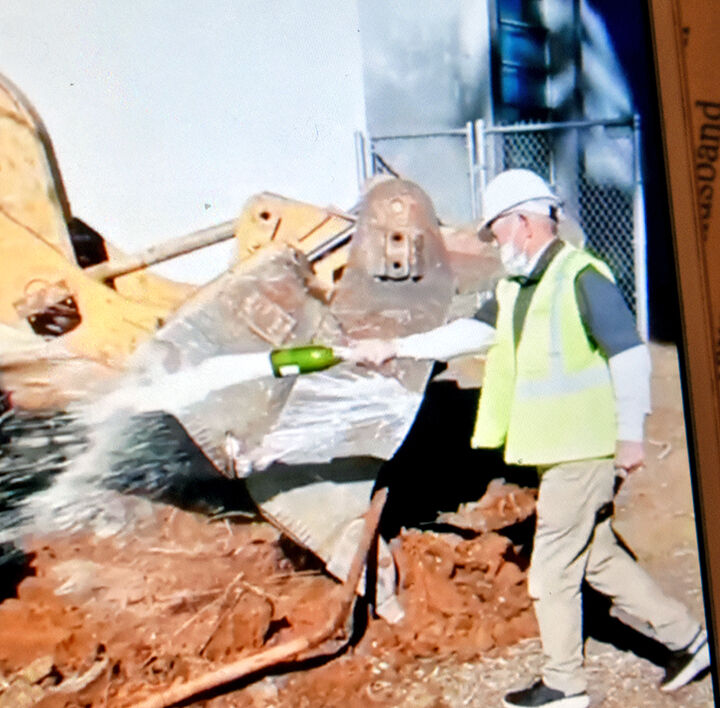 Steve Stockton, president of the Redlands Historical Museum Association breaks a bottle on the blade of a skip loader to commemorate the groundbreaking of the Museum of Redlands.

Nelda Stuck, who first proposed the Museum of Redlands in 1999, waves from a skip loader as Museum Association President Steve Stockton stands by. 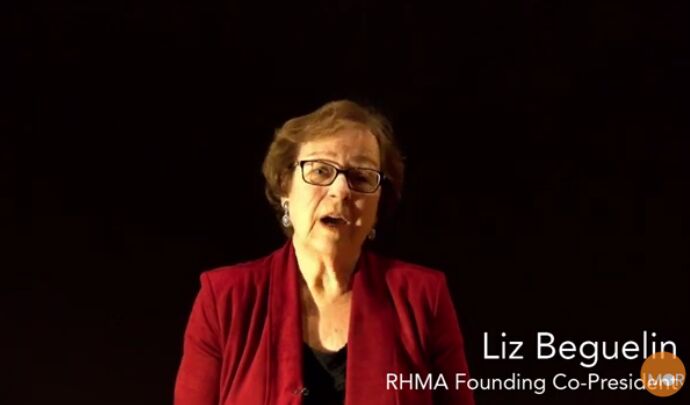 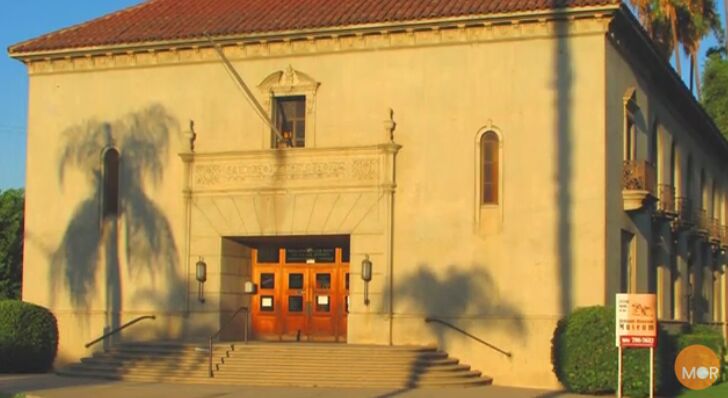 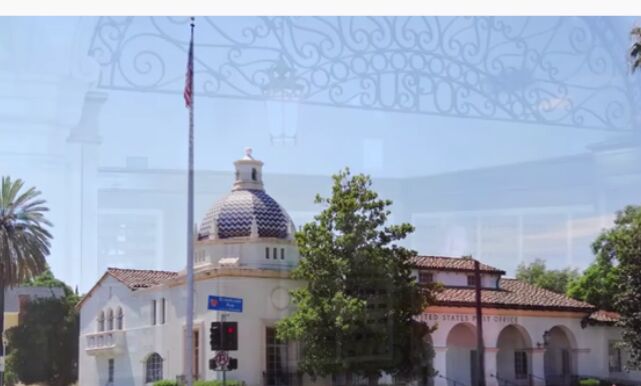 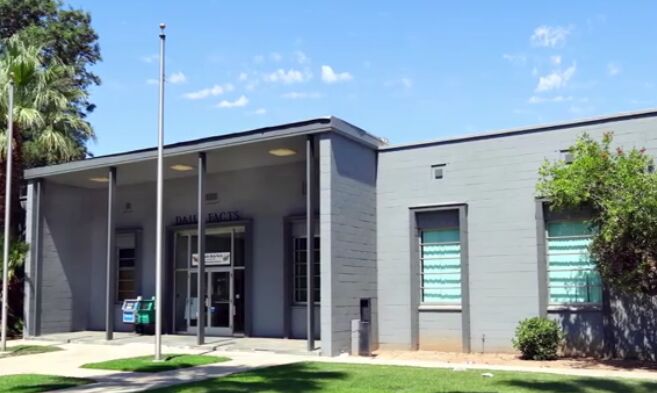 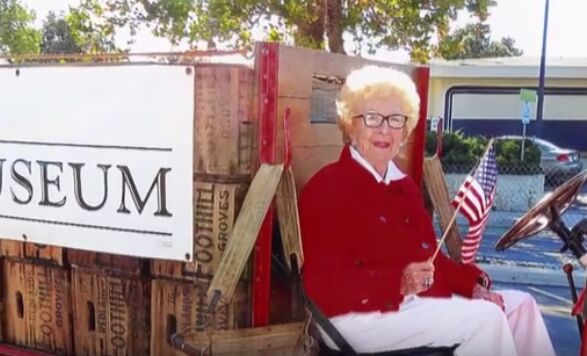 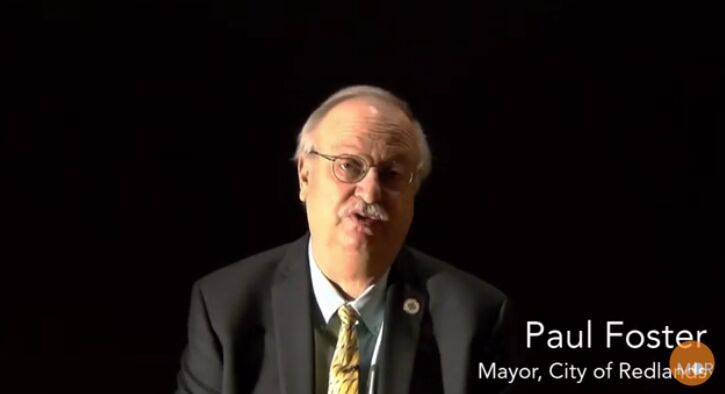 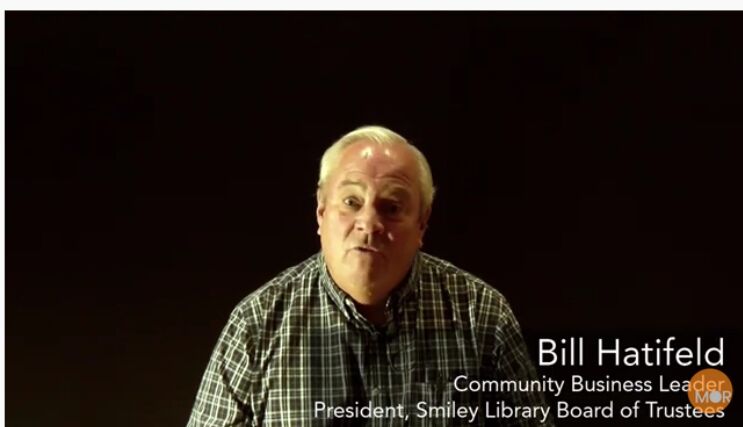 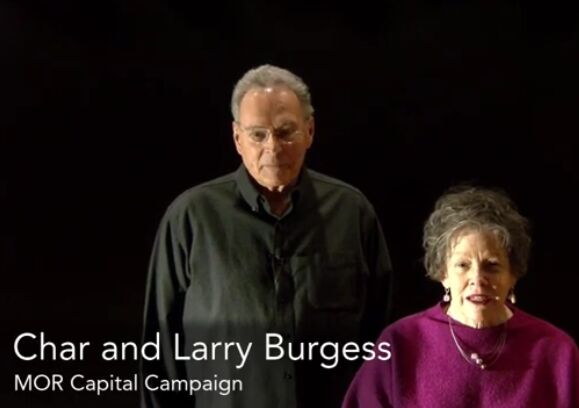 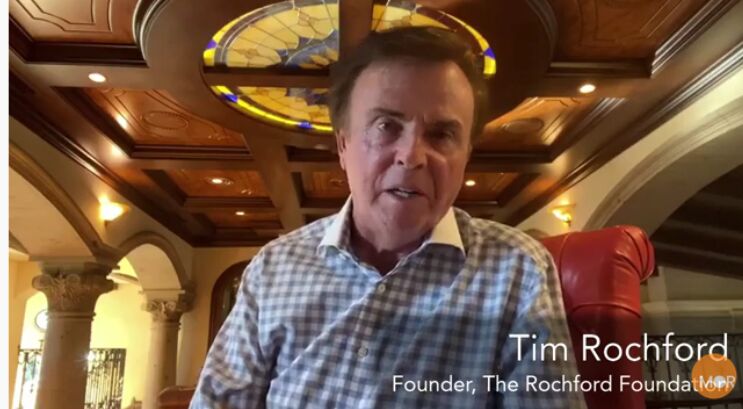 Supporters of the Museum of Redlands celebrated two decades of planning, fundraising and dreaming with a virtual groundbreaking on Saturday morning.

The event was highlighted by Nelda Stuck driving a skip loader in what’s left of the parking lot of the old Redlands Daily Facts building. Steve Stockton, president of the Redlands Historical Association board, broke a bottle of champagne on the machine’s big blade to commemorate the occasion.Stuck, a longtime feature writer for the Facts before her retirement, first suggested the creation of a museum to display the historic treasures collected by the A.K. Smiley Public Library to Liz Beguelin, then president of the Redlands Area Historical Society.

After an opening statement from Stockton on Saturday, Beguelin said, “Nelda Stuck approached me asking if I had ever thought about a museum for Redlands. Over the next few weeks, Nelda and I met often, discussing the possibilities.”

This led to a meeting with more than 75 Redlanders on May 19, 1999. The plan was to make the museum a part of the library, similar to its relationship to the Lincoln Memorial Shrine. Stuck and Beguelin approached Bill Hardy Jr., then chairman of the Library Board. He endorsed the idea pending the approval of Library Director Larry Burgess.

The first choice for a museum site was the old city hall, a building constructed in 1941 as part of President Franklin D. Roosevelt’s Works Progress Administration. It was an ideal location at the edge of Smiley Park between the library and the new city hall.

But the Redlands Police Department turned the old city hall into its administrative office.

The police previously occupied the association’s next choice, Safety Hall at Eureka Street and Brookside Avenue. It was designed by renowned architect C. Paul Ulmer and completed in 1963.

“That building was structurally deficient,” he said. “As you see now, it’s just a pile of rocks and rubble, and weeds have taken over.”

The museum then looked across the street at the Brookside Avenue post office, designed by prominent architect G. Stanley Wilson and built between 1932 to 1935. It was added to the National Register of Historic Places in 1985.

“That was at one point just 30 days away from being in our possession,” Stockton said. “But the feds couldn’t decide what they wanted to do with the post office, so that fell through the cracks.”

Another potential location was the historic Mutual Orange Co. Packinghouse next to the Studio Movie Grill. The 1912 building would have been difficult to refurbish, he said. It is now being renovated to become the Redlands Public Market, which will house several unique restaurants.

In 2015, the Facts building became available. One of the museum’s most generous contributors, Clara Mae Clem, bought it for the association.

The Facts building was constructed on the site of a former orange grove in the mid-1950s. It was designed by Benjamin J. Rabe, an architect who served as the first president of the Redlands Art Association. The building has 14,068 square feet of floor space, lots of room for parking and a vacant lot next door. A second floor, which will be used for storage, will add 7,271 square feet, according to plans approved by the Redlands Planning Commission a year ago.

The lot next door will be home to a 2,283-square-foot garden event center, eventually. Stockton has said more money will need to be raised for that project.

The museum association hired the award-winning architectural firm of Johnson-Favaro.

“Principal Steve Johnson and Jim Favaro envisioned a museum campus that is as bold as it is transformative,” said Smiley Archivist Nathan Gonzales in the video, “a place that speaks of this generation and this moment in our town’s history.

“The vision sees possibilities for the future that are endless.”

The association also hired Tilden-Coil Contractors to build the museum. It has more than 80 years of experience with construction projects in the Inland Empire. In Redlands, the company added the wings to the Lincoln Memorial Shrine in 1998 and replaced the tower on the A.K. Smiley Public Library in 2002. Tilden-Coil also has worked on a number of projects with the University of Redlands, most recently the Center for the Arts.

Mayor Paul Foster noted that Redlands has long been known as the jewel of the Inland Empire.

“Today, we’re here to add another jewel into our crown with the groundbreaking of this museum ,” he said.

He said the museum will join the great public spaces in the Redlands community, such as the Redlands Bowl, the A.K. Smiley Public Library, the Lincoln Shrine, Redlands Community Hospital, the University of Redlands and the YMCA.

A tip of the Hatfield

Bill Hatfield, owner of Hatfield Buick and current president of the Library Board, said Redlands has been spoiled by all the great things created by past generations.

“And here we are doing it again,” he said. “It’s the people of Redlands coming together and building the Museum of Redlands.

“As part of the Redlands business community, I’m excited about the prospect of seeing the museum come to life and all the collections and the wonderful things we can do in the future.”

Char Burgess, former dean of students at the University of Redlands, quoted Maya Angelou: “You can’t go through life with a catcher’s mitt on both hands. You need to be able to throw something back.”

This museum has become this community’s opportunity to throw something back, she said.

Larry Burgess, who once served as Redlands’ acting city manager, thanked the community for its support.

“You’ve made me immensely happy,” he said. “Way back in 2000, I was privileged to have one the signatures on the resolution to create a museum for Redlands when the City Council voted unanimously to approve it. Subsequently, I wondered if I was going to live long enough to see it. But here we are — a groundbreaking, a wonderful occasion and a testimony to the fact that you, Redlanders, can and will make it happen.”

The museum association has raised $12 million, including $3 million from Jack and Laura Dangermond, founders of Esri. Last year, Clem joined Tim and Carol Rochford in putting up $2 million in matching donations to spur contributions from the public. The Jack H. Brown Family Foundation also made a seven-figure donation, but the amount was not disclosed. The Historical Society put up $10,000.

Tim Rochford said it has been exciting to help with the restoration of historic buildings on State Street and the establishment of the Rochford Foundation, which regularly opens the Burrage Mansion to underprivileged children.

He made appeal for additional contributions.

“Let’s embrace this together,” he said. “Let’s watch history unfold. This will be terrific. Redlands is steeped in generosity, in contributions, and let’s keep it going.”