Most Redlands residents probably remember the view from the Eureka Street/Interstate 10  off-ramp of central Redlands four years ago: Empty lots and dilapidated buildings.

Property One is transforming that dismal entry to the center of the city into the grand entrance that the Jewel of the Inland Empire deserves.

It started in 2017 with the opening of the Packing House District shopping center, anchored by Sprouts.

Phase 2 on the south side of Stuart Avenue will be complete in October.

Farther south along Oriental Avenue the Escape Craft Brewery is transforming a historic brick building built as a trolley barn — although never used for that purpose — is nearing completion.

Next door, the J. Riley Whiskey Distillery is under construction on the former site of Redlands Auto Electric. A 4,800-square-foot J. Riley restaurant is being built on the corner of Oriental Avenue and Eureka Street.

However, the real game changer is the retail complex and parking garage just north of the historic Santa Fe Depot at Stuart Avenue and Third Street.

“It will be an architectural gem,” said Don Berry, Esri’s director of operations.

The garage will provide 384 spaces with 200 spaces reserved for the Redlands Passenger Railroad Project, also known as the Arrow Train.

On off-peak hours, the spaces for rail passengers will be available to the general public, said Redlands spokesman Carl Baker.

The parking structure will have four levels and room for 650 bicycles. There will be retail opportunities on the east side of the structure.

Another building is planned east of Third Street. Berry expects about two-thirds of that building will be for offices and the rest for dining.

Of course, the true architectural gem and historic treasure is the Santa Fe Depot, built in 1909 and 1910.

Property One purchased the depot from theater owner George Krikorian in September 2017.

There are lots of walkways throughout all five projects.

Paths continue through the park that is now west of the brewery on Oriental Avenue.

“This will make it easier to connect to the Orange Blossom Trail where it resumes heading west at the intersection of Redlands Boulevard and Texas Street,” Berry said.

A designated pick-up and drop-off spot will be established on Oriental Avenue between the brewery and the J. Riley restaurant to make it easier for customers to use ridesharing services to visit the brewery and distillery rather than driving themselves.

Another pick-up and drop-off spot will be established on West Stuart Avenue for rail passengers.

The first Packing House District was designed by DLR Architects. Michael Stephens was the lead architect. Since then Stephens and two partners have launched a new firm known as SGH.

“They have been the principle architects for the five projects we have in the immediate area: Packing House District Phase 2, Starbucks, the Distillery and the parking structure/office building,” Berry said.

The brewery and Santa Fe Rail Station are registered historic buildings, so ARG — Architects Resource Group out of Los Angeles — have been responsible for those.

Packing House District Phase 2 is expected to be complete by October. Some tenants are under lease already, but there are still vacancies, Berry said.

Escape Craft Brewery is moving to a historic 60-by-100-foot brick built in 1906 by A.E. Taylor for $5,000 for Henry Fisher and his son John, who operated the trolley barn on Citrus Avenue.

It was last used by Rondor repair shop for Audis and Porches, according to a 1986 historic survey.

It was known as the Rondor building because the couple who owned the repair shop were Ron and Dorothy.

“The building was constructed in 1906 and it’s the last building of its type in the city,” said Brian Desatnik, director of development services for the city of Redlands in a May 2019 Redlands Community News story.

“Its original use was storage of cars for electric trolleys. It was later used for general storage of baggage and other items for passengers traveling on the Santa Fe trains.”

The plan was to establish a new trolley line from downtown to the University of Redlands. However, a recession struck in 1907 and the line was never built.

It is somewhat ironic that the slogan on Escape Craft Brewery is “Brewed for the journey.”

Redlands residents John and Melinda Fisher, who met in 1995 when they attended Redlands High School, opened it in January 2015.

They have a taproom on Nevada Street in Redlands and are planning a new location in Laguna Nigel.

The Planning Commission approved a 706-square-foot patio for the brewery in January — before anyone realized how important outdoor dining would become.

“We hope to get keys for the new location in downtown midway through October,” Melinda Fisher said. “Couple more months to get set up and open.”

Jason Riley, a Redlands native, also has a location on Nevada Street in Redlands. The distillery was established in 2015.

Melinda Fisher said she and her husband know Riley and are looking forward to being his neighbors.

The 2,800-square-foot former site of Redlands Auto Electric will become the distillery. The larger building on the corner will be the J. Riley restaurant.

South of the boundaries of the Property One project, Studio Movie Grill sits mostly vacant waiting for San Bernardino County to drop from purple to red in California’s COVID-19 rankings when it can open with 25% capacity. The grill is open for takeout.

Also in the neighborhood is the Redlands Public Market food court, which will fill the historic Mutual Orange Distributors with at least a dozen restaurants, including a vintage railroad car and other amenities.

Property One is a separate entity from Esri, Berry said, but Esri founders Jack and Laura Dangermond are among their investors.

The city of Redlands is also a partner in the parking structure development.

A worker toils on a scaffold on the future home of the Jeremiah Riley Whiskey Distillery, which will occupy the former site of Redlands Auto Electric. 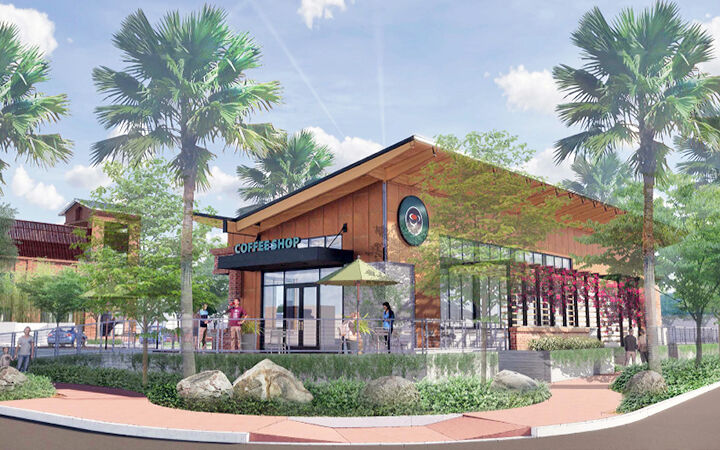 The distilling equipment will be a be in a 2,800-square-foot building in the site of the old Redlands Auto Electric store.

Images of a changing Redlands

A worker toils on a scaffold on the future home of the Jeremiah Riley Whiskey Distillery, which will occupy the former site of Redlands Auto Electric.

The distilling equipment will be a be in a 2,800-square-foot building in the site of the old Redlands Auto Electric store.