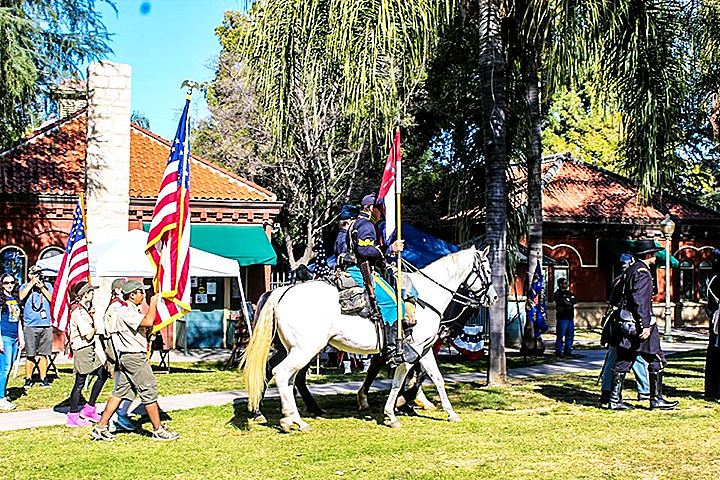 Scouts hike from Redlands High School to the Lincoln Memorial Shrine during the 81st annual Lincoln Pilgrimage on Saturday.  It became part of the shrine’s annual open house five years ago. 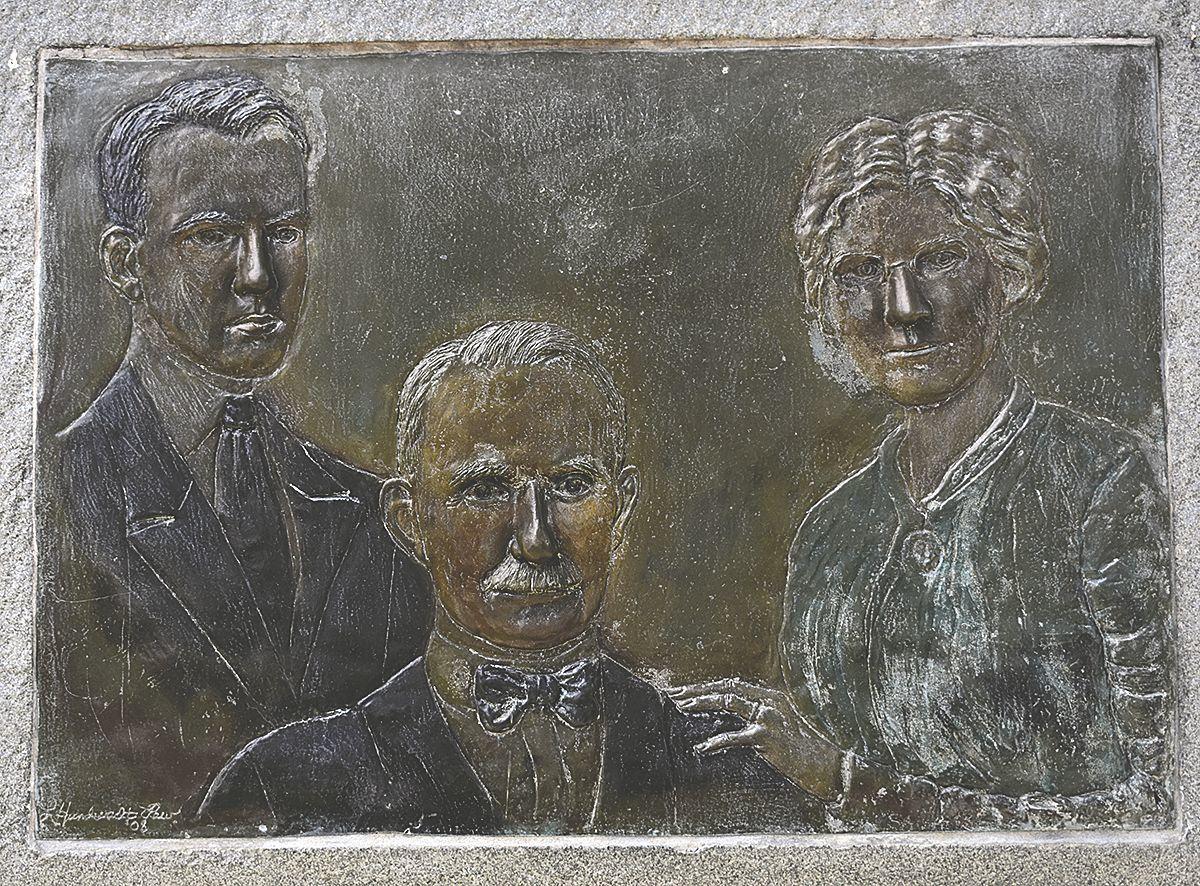 From the plaque honoring the Watchorn family in front of the Lincoln Memorial Shrine:

“As did their friends the Smiley brothers, Robert and Alma Watchorn contributed greatly to Redlands’ cultural life. A labor organizer, Commissioner of Immigration at Ellis Island, and oilman who experienced the American dream. Robert was a self-made man, and identified with Abraham Lincoln. He shared that interest with his only child, Emory Ewart. Ewart’s impaired health led to his death at age 25, the result of his service as a pilot in World War I. Devastated by the loss, the Watchorns decided to memorialize their son by erecting a museum in Redlands honoring Lincoln. This bas-relief is donated by Drs. Boyd, Alan and Kenneth Nies in memory of their parents, Dr. Arthur and Mary Nies, who also have lived the American dream.” 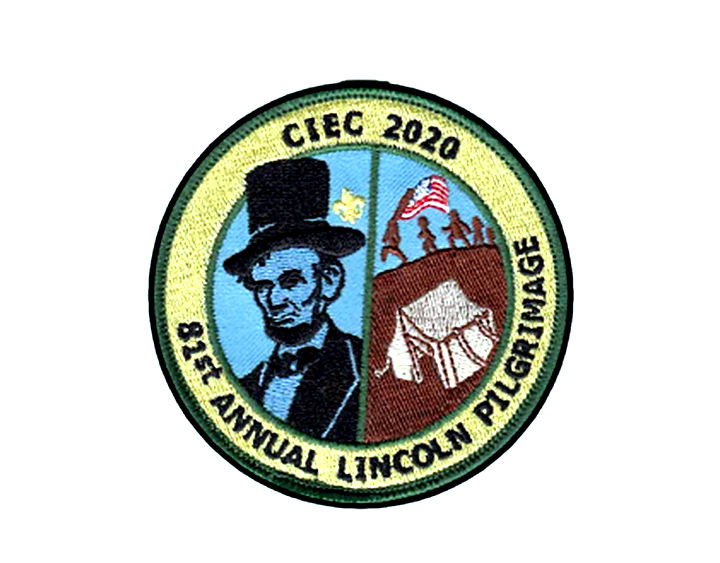 Scouts can earn a patch for participating in the Lincoln Pilgrimage. 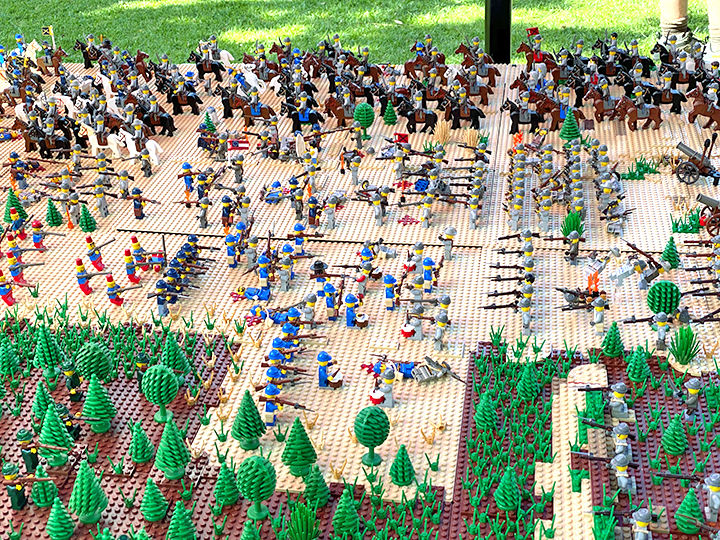 A LEGO display with 700 soldiers and 300 horses teaches kids about history in a fun way. 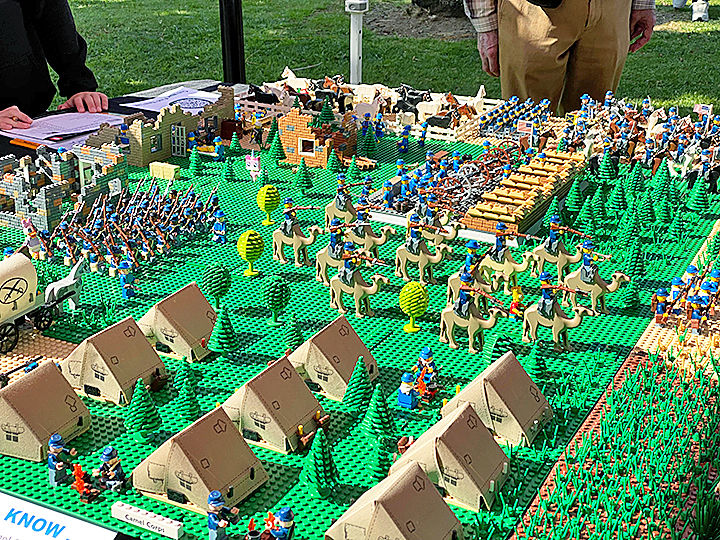 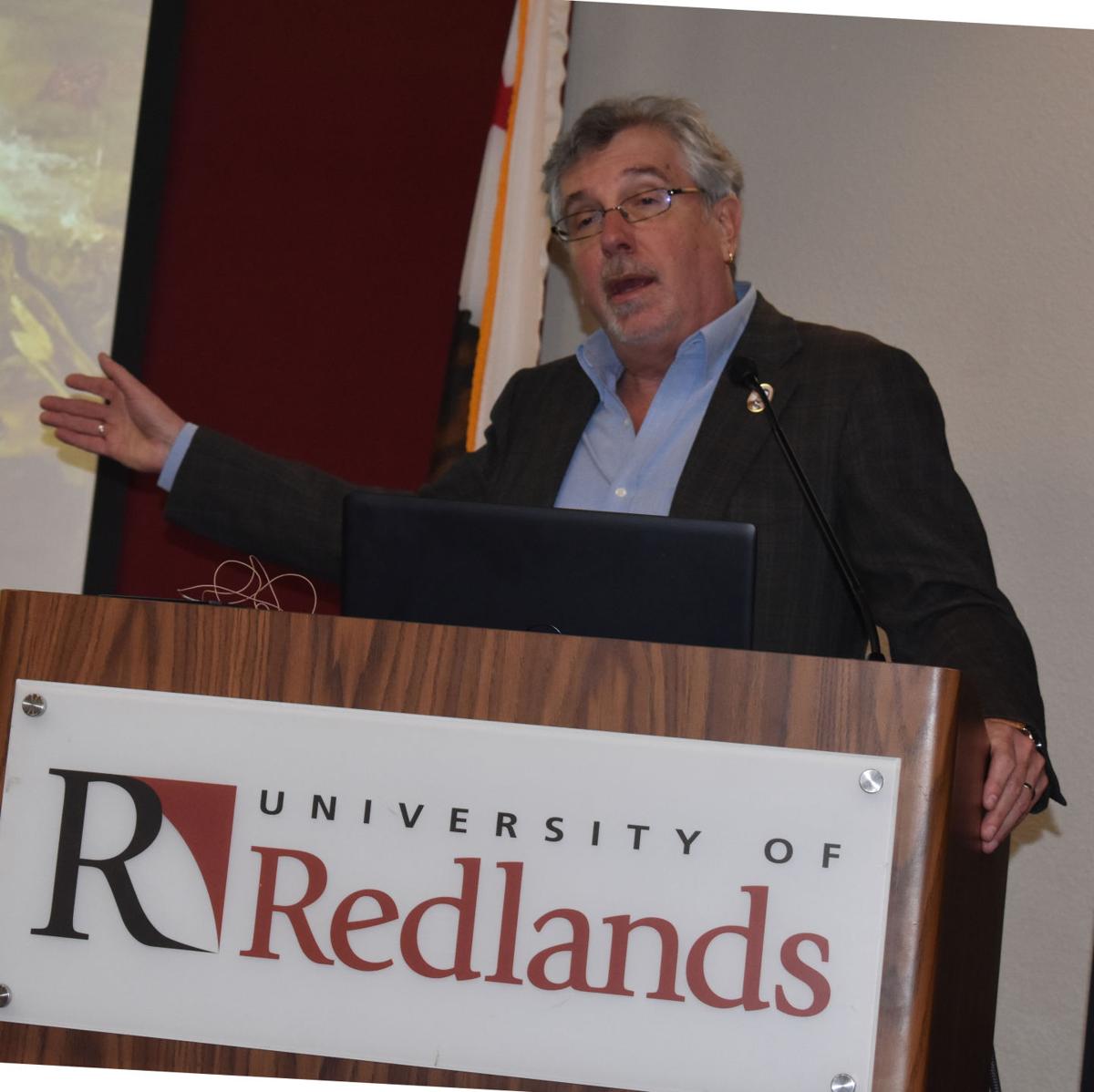 Douglas Egerton, author and history professor at Le Moyne College in Syracuse, New York, speaks at this year's Watchorn Dinner on Wednesday, Feb. 12, at the University of Redlands' Orton Center.

The people of Redlands share a special connection with Abraham Lincoln through the Lincoln Memorial Shrine.

New exhibits, Civil War re-enactors, LEGO displays and an appearance by actor Robert Broski delighted guests who have a passion for history.

For the fifth year, the open house merged with the Lincoln Pilgrimage, a parade hosted by the Gray Arrow District of the Boy Scouts of America.

Before the Lincoln Memorial Shrine was added to the A.K. Smiley Public Library’s property in 1932, Abraham Lincoln memorabilia had its own room.

When the collection became too big to house, Robert Watchorn, who had his winter home in Redlands, decided to build the shrine as a memorial to his son, who died of injuries suffered in World War I.

Watchorn had always been an avid Lincoln admirer and had developed a huge collection of artifacts. The shrine’s octagon shape was designed by renowned Southern California architect Elmer Grey.

Two 75-foot-long patios were added to the building in 1937. The patios were replaced in 1998 by two wings that enhanced the capacity of the building. Etched on the limestone used for the walls of the original building are excerpts from Lincoln’s speeches, inscribed by famous American sculptor Merill Gage.

Inside the shrine are paintings and relics from the 1800s, including a plaster mask of Lincoln’s face and hands from 1860. 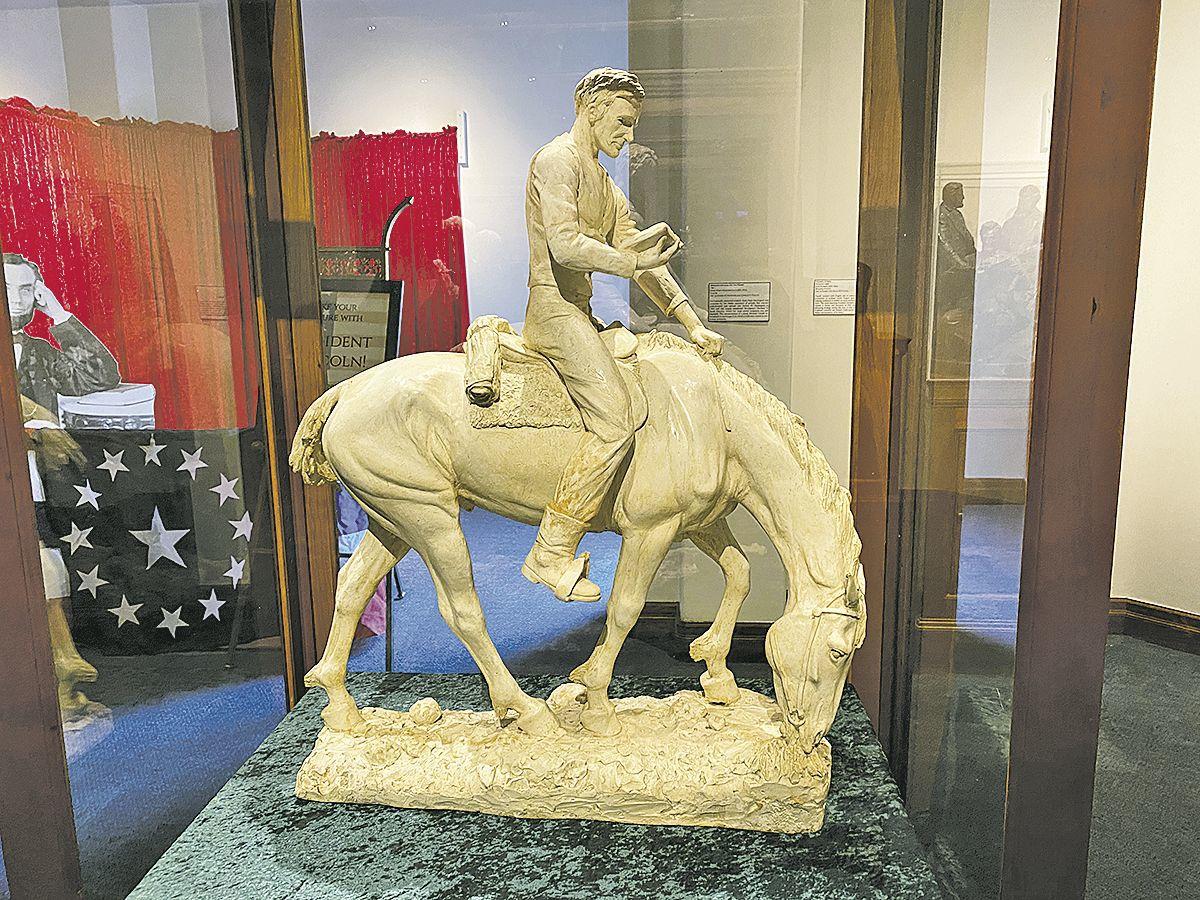 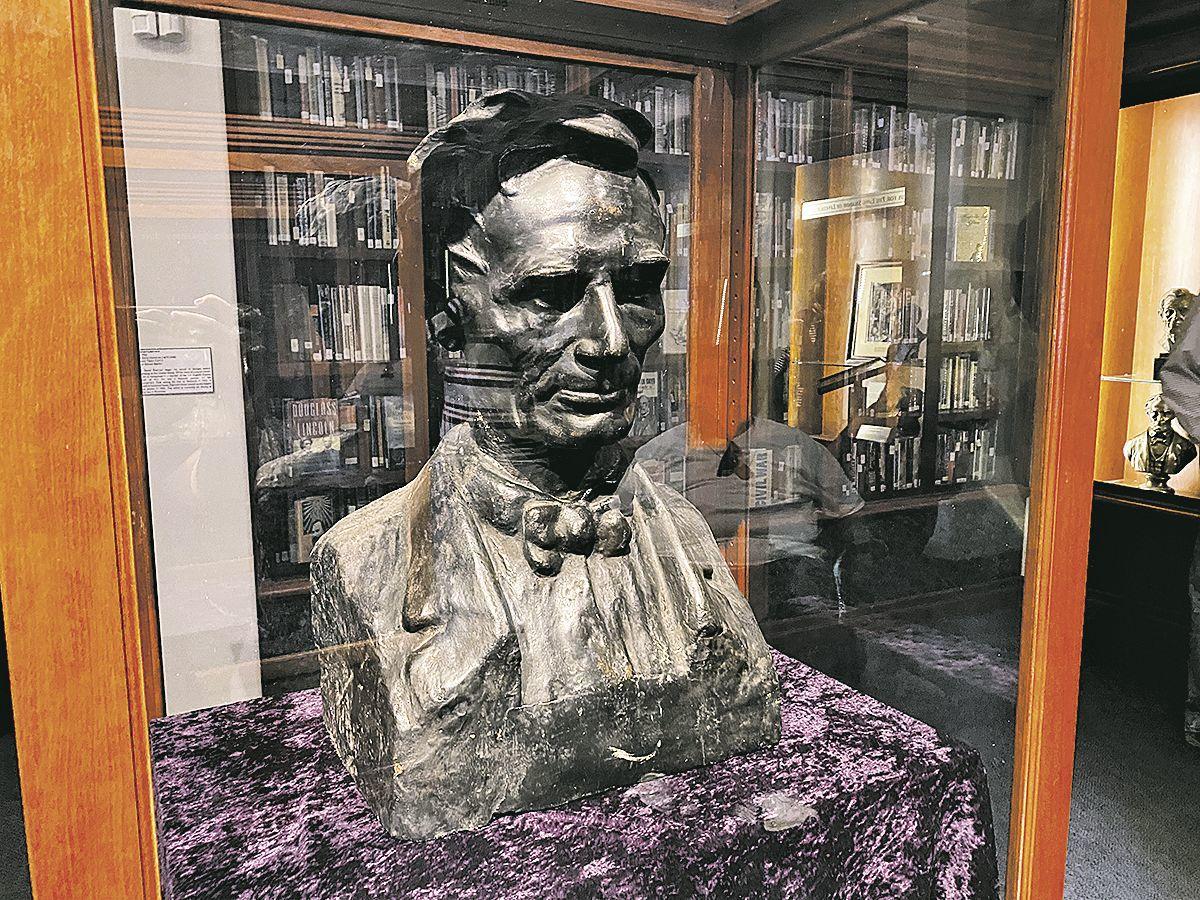 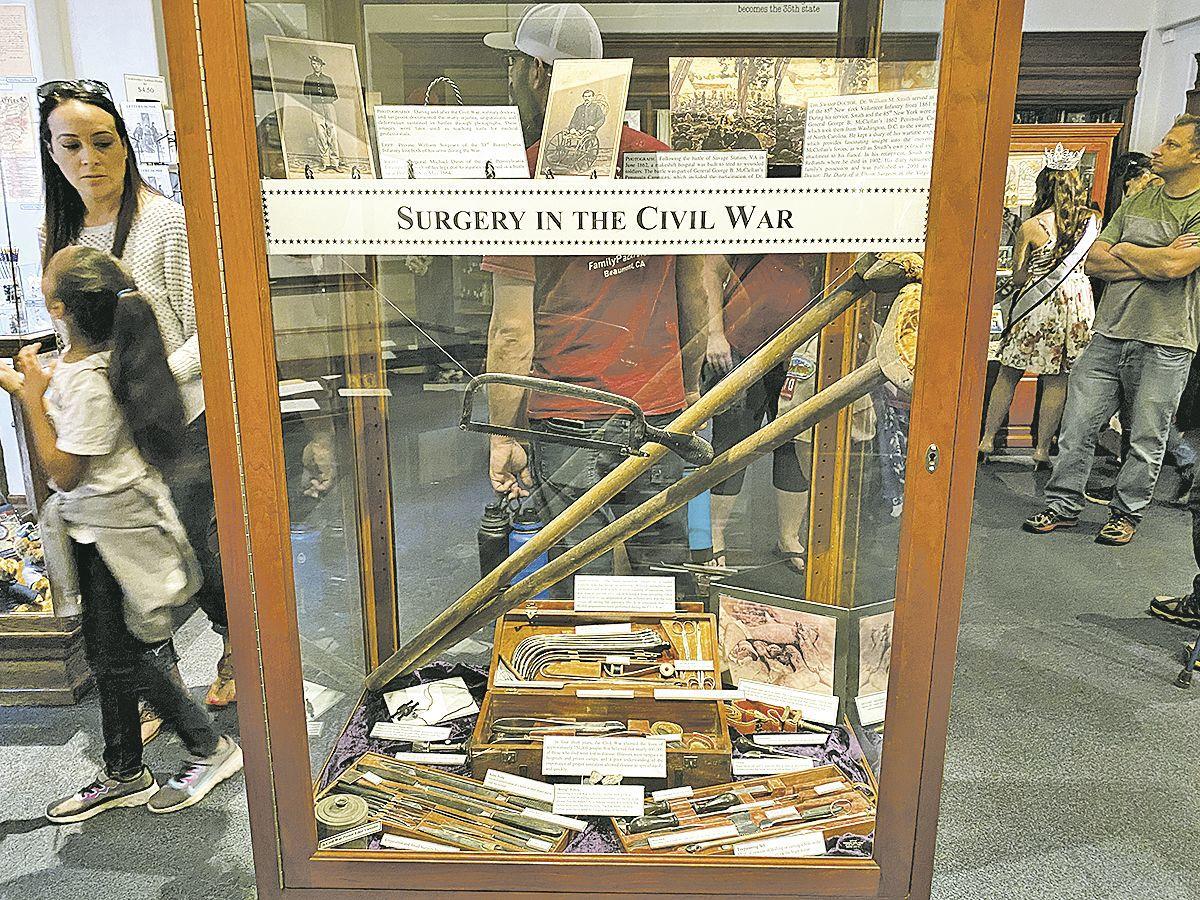 “This year, 50 percent of our exhibits are new,” said Gonzales. “Almost the entire west wing is new.”

Everything displayed is from the library’s collection.

One of the exhibits, Lincoln in Sculpture, featured pieces new to the shrine’s collection.

“We have a piece by Anna Hyatt Huntington, one of America’s most prominent sculptures of the 20th century,” said Gonzales.

The sculpture depicts Lincoln reading a book on horseback.

“We also have two new letters and manuscripts written by Lincoln,” said Gonzales. “One was written when he was a lawyer, and one was written during his presidency.”

The Boy Scout pilgrimage to the Lincoln Shrine has been a tradition since 1940.

“One hundred and five scouts from Riverside were the first to start the parade here in Redlands,” said Don Buchanan, Boy Scout leader and pilgrimage coordinator.

This year, 500 scouts from Riverside and San Bernardino counties attended the pilgrimage.

The Lincoln Pilgrimage and the Lincoln Shrine open house used to be two separate events.

“Five years ago, we merged with the open house,” said Buchanan. “The Lincoln Shrine wanted to bring more people to the open house.”

Every year the Scouts walk from Dodge Field at Redlands High School to the Lincoln Shrine. This year, American flags were carried by Boy Scout Troop 19. The Sons of Union Veterans led the parade.

After every scout reached the shrine, there was a flag ceremony led by Mayor Paul Foster.

Why do the Boy Scouts make the pilgrimage to the Lincoln Shrine?

According to Buchanan, it is to celebrate and honor the ideals and virtues of Lincoln.

“Educating the younger generation is sometimes a challenge, especially across two counties,” said Buchanan. “The pilgrimage teaches kids about the Civil War and the elimination of slavery. It keeps the history alive.”

Buchanan has been a Boy Scout leader for over 30 years.

“The first pilgrimage I attended was in 1986,” said Buchanan. “In 1989, I volunteered to help get the kids lined up for the parade. This is my 31st year coordinating the event.”

One of the booths that draws the most attention at the open house every year is The Inland Empire LEGO User Group.

The group has been bringing LEGO Civil War displays to the open house since 2015.

“In 2015, I had just two weeks to build a cavalry battle scene,” said Suzy Lentchner, community ambassador for LEGO. “Luckily, I already had a bunch of horses for it.”

The original scene was 20 inches long and 30 inches wide. It has since grown to be 20 feet long and 5 feet wide.

The scene started as a particular battle. Now it displays all of the different types of people and items used in the Civil War.

“I do a tremendous amount of research to make sure everything is accurate,” said Lentchner. “I also have information cards around the display with facts about the war.”

“One fact I find fascinating is that there were sharpshooters in the Civil War,” said Lentchner. “They had rifles with scopes on them. So, I have them on my display.”

The display is a fun educational tool for Lentchner.

“I used to hate history as a kid,” said Lentchner. “What is neat for me is that the display excites kids and teaches at the same time.”

How does Lentchner transport such a fragile item?

“I learned the hard way,” she said. “The first time I took it apart, it took 13 hours to reassemble.”

Lentchner’s husband has since designed custom boxes that have shelves built into them.

“The shelves are designed so that different sections of the display can stay built in the boxes,” said Lentchner.

The festivities continued on Wednesday, Feb. 12, with the 88th annual Watchorn Lincoln Dinner.

“The dinner was started in 1932,” said Gonzales. “Watchorn decided there needed to be something to honor Lincoln, so he hosted a dinner to talk about the former president.”

Now the dinner is hosted by the Lincoln Shrine and held at the University of Redlands’ Orton Center.

“Over 330 people attend the dinner,” said Gonzales. “It is the biggest event honoring Lincoln on his birthday in the nation.”

“Some come because they love Lincoln; some come to learn more about him,” said Gonzales. “We have everyone from students to retirees.”

Each year, a speaker that has researched Lincoln addresses the guests. Douglas Egerton, author and history professor at Le Moyne College in Syracuse, New York, was the featured speaker this year.

Egerton’s keynote address was about the first black soldiers in the Civil War.

“We try to have a balance between education and entertainment,” said Gonzales.

How concerned are you about ultraviolet light?