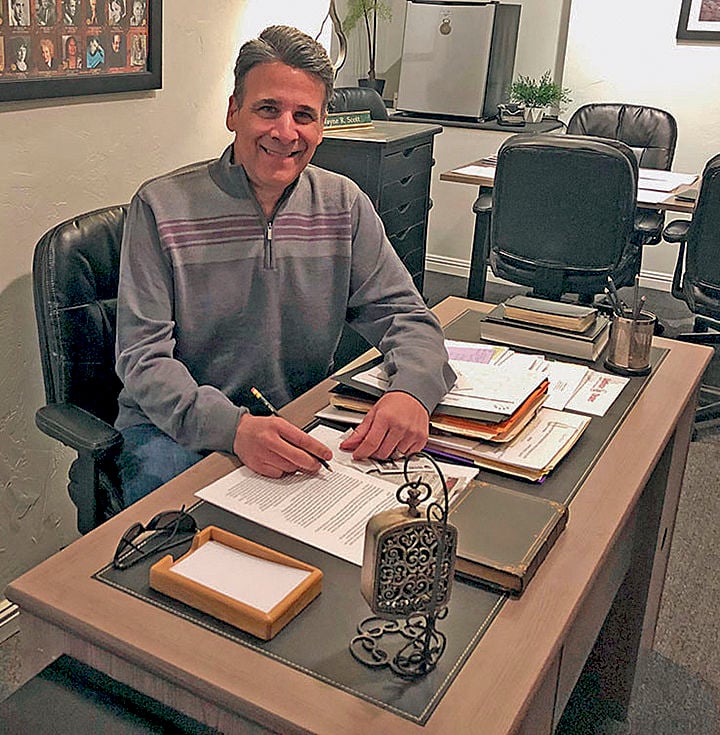 LifeHouse Theater founder and president, Wayne Scott in his office.

“Seussical the Musical” runs through March 8 with a deaf interpretation presented on Friday, Feb. 21.

LifeHouse Theater founder and president, Wayne Scott in his office.

“Seussical the Musical” runs through March 8 with a deaf interpretation presented on Friday, Feb. 21.

All art has a message, says LifeHouse Theater founder and President Wayne Scott. He wants his audience to get lost in that message.

The theater is celebrating its 26th anniversary.

Scott said the following values were taught to him growing up: fairness, kindness, reaching out to other people and helping the underdog. He said that some of those values are now missing in our society and that they “provide it here (LifeHouse) and a lot of families appreciate it.”

Scott said it is an “underserved market,” and “if only Hollywood got it.” Scott said the theater and the arts have “had an unsavory reputation for decades,” and that they “are trying to redeem that, we are trying to in our small corner of the world, use the arts in a positive way.”

He said that LifeHouse’s charter says that their messages are always going to be positive and uplifting. Scott “wants people who come here (LifeHouse) to feel as if they're not judged and that they (the audience) are loved.”

Between 1977 and 1982, Scott graduated with double majors in political science and religious studies at the University of California, Riverside. Scott immersed himself in the Inland Empire community theater as an actor and director along with interning for state Assemblyman and Sen. Bill Leonard, where he learned the ropes of local government and public relations.

Later Scott became a vice principal at Arrowhead Christian Academy. During his six years at Arrowhead, he taught social studies, founded the drama department and composed the school's alma mater.

Some of the students he met at Arrowhead later became active at LifeHouse Theater. Scott's mentor during that time was William Dixon along with his wife Patsy, who founded Junior University in 1962. The university is a nonprofit, youth-oriented musical theater organization that produces family friendly entertainment.

Dixon also arranged 200 of Scott’s songs for the next 10 years and served as his mentor before his death in 1994. Scott also acted and helped direct several shows through 1990 and served as a board member through 1998.

In 1986, Scott produced his first musical “Scrooge,” which featured actor Clifton Davis known for his role as the Rev. Reuben Gregory on the popular NBC sitcom “Amen.”

“Scrooge” premiered at the Trinity Church in Redlands and became so popular that the show did a Southern California tour. The next year (1987) Trinity commissioned Scott to write dramas and musicals to be staged on the first Sunday of every month until 1993.

Between 1988 and 1992 Scott attended seminary at the International School of Theology where he received his master’s in theology and based his thesis on the musical version of “Ben-Hur.” Scott was then hired as an associate pastor at Trinity where he oversaw the drama and singles ministries. In addition to this, Scott wrote, designed and produced “Bethlehem Marketplace,” a walk-through adventure that was presented in U.S. cities for the next 11 years along with his stage production of “Esther” that premiered at the Redlands Bowl to a standing-room-only crowd before going on a Southern California tour.

In 1990, Scott went on tour throughout Trinidad, South America, with his Old Testament musical “Heroes” the first-everAmerican musical in that part of the world.

In 1991, Campus Crusade for Christ founder Bill Bright commissioned Scott to create the Arrowhead Bowl Associate, a theatrical amphitheater where thousands attended Scott’s original musicals and drama productions such as “The Lion, the Witch and the Wardrobe,” “The Master Craftsman” and “Your Witness,” which were produced through 1994.

In 1992 LifeHouse Productions (now LifeHouse Theater Outreach) officially incorporated in the state of California and multiple touring productions continue to be done throughout the state. Strand Communications commissioned Scott to write a 13-episode video series, “The Kids of Rainbow Cove,” which was presented to more than 2,000 churches nationwide. That same year he produced national videos for Hospital Chaplains of America, Mission Aviation Fellowship and Ronald McDonald House. Two of Scott's performances of “Heroes” and “Scrooge” premiered at the Poway Center for the Performing Arts in San Diego County. The money Scott earned from those projects was used as seed money for LifeHouse Theater.

In 1994, after a search for rehearsal and storage space led to an office mall that Scott and his company converted into a 60-seat theater, LifeHouse Theater was born. That same year the theater attracted thousands of new guests and performers and the theater was expanded to 165 seats along with the start of drama classes.

In 1999, board members from Redlands Christian School and LifeHouse Theater proposed that a soon-to-be vacated church next to the school campus become a new home for the theater. After raising $185,000 in six months, LifeHouse opened its current 210-seat theater on Church Street in Redlands with a performance of “Ben-Hur.” Since then Lifehouse has expanded its library of musicals and has created a script catalog that allows the theater's musicals to be exported around the world. Shows at the theater are interpreted for the deaf beginning in 2004, followed by LifeHouse awarding its first scholarship in 2006.