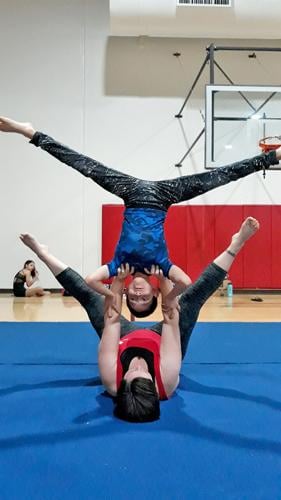 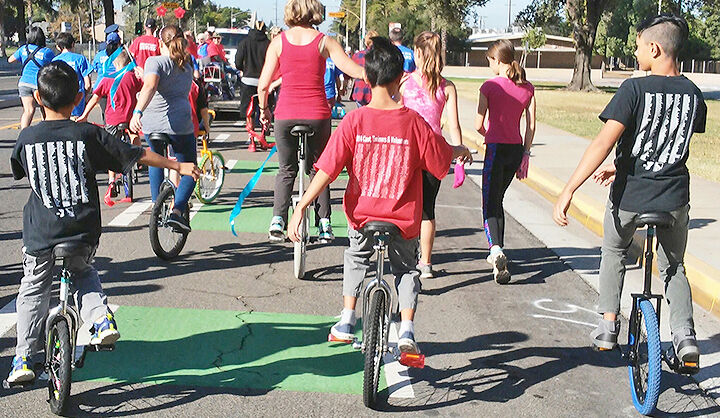 The Macias boys, Ian, Rhys and Gavin, ride unicycle in the July 4th parade in Redlands in 2018.

The Macias family joined the Great Y Circus the summer of 2013. It was a convenient way to have their three boys enter the same sport and have just one place to go for extracurricular activities. One year later, their lives had changed. Circus wasn’t merely an activity but a lifestyle.

“We had friends who were doing [circus].” said Cheryl Macias as she explained how idea of having all three kids at the same place at the same time was appealing to them and a reason to sign up for circus classes in Redlands. The family lived in Riverside at the time and Gavin, Rhys and Ian were 10, 7 and 3 years old.

In the beginning they were there twice a week for beginner’s classes.

“My kids wanted to do unicycle classes, which was on the opposite days of the week, and I told them, don’t ever expect to do unicycle,” she said and laughed, “The very next year we did unicycle.”

Today the three boys, now 18, 15 and 11 years old, are doing acro, stilts, hand balancing, teeterboard, diabolo, tear drops and Chinese pole. They participate in four classes each while Cheryl is one of the trainers for Beginning Risley and she performs in acro. This year the boy’s father is in the show for the first time. Daniel Macias is juggling.

“He actually taught himself to juggle as a kid and so he already had this skill and then to have it suddenly come into play with the things our family is involved with,” Macias said.

The family ended up moving to Redlands to be closer to the circus after three years participating.

“I never imagined we would get this involved,” she said with a smile. “It has been interesting to watch them grow and gain skills and being able to teach other kids,” she said. “My oldest trained the advanced unicycle act one year and now he’s up on this 20-foot unicycle that I never even could have imagined.”

In 2017, Cheryl began taking classes herself.

“It was something I never imagined myself doing,” said Macias. “I was never in sports as a kid. I think I did my first cartwheel when I tried out for my first acro class.”

The kids have participated in the summer circus camps too in the past. Today, Gavin is a trainer, Rhys is a facilitator and Ian has already shown an interest in becoming a trainer.

“It’s an amazing way to give back,” said Macias, “for a program where all the trainers are volunteers.”

During the pandemic, the Macias kids participated in a couple of the circus classes at the Y to keep up with their skills.

“We ended up buying equipment to have at home to keep them going,” she said.

For the past year it has been a relief to be back at the circus.

“The circus becomes your social base. This is where you make friends,” she said. “Even more for my boys since they are home schooled. This is where they meet their peer group.”

The Macias Family will be in several acts at this year’s performance. Keep an eye on the Chinese pole where all three Macias boys will perform in the same act for the first time.

Are you interested in learning to fly at the Redlands Municipal Airport?